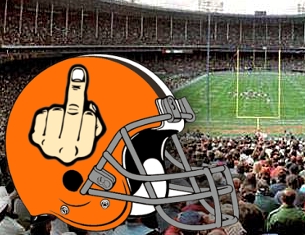 Seeing the Baltimore Ravens in the Super Bowl prompts different reactions from different people. For me, it makes me think of cherry bombs and hacksaws.

Let me back up a bit. Back in the day, I used to work with a guy (we’ll call him Bob) who was a massive Cleveland Browns fan. I would taunt him mercilessly over this fact, asking him why he’d pledged his support to a team that lacked sufficient imagination to come up with a logo. Anyway, when Browns owner Art Modell announced in November 1995 that he was relocating the team to Baltimore and that the Dec. 17 game against arch rivals Cincinnati would be the team’s last at Municipal Stadium, an ashen-faced Bob walked into my office and simply said two words: “Road trip.”

My recollection of that weekend is somewhat hazy, no doubt compromised by the combo of alcohol, sleep deprivation and greasy food intake. Anyway, Bob and I drove down to Cleveland (from Toronto), arriving the day before the game. We immediately hit The Flats, bouncing from bar to bar, drinking and commiserating with Browns fans, earning lots of props when we revealed how far we’d come to be part of history. (Actually, Bob wanted to be part of history; I simply had nothing better to do that weekend.)

GOING TO A HANGING
Sunday morning, Bob and I shook off our hangovers and went downtown to a radio station parking lot, where a ‘Muck Fodell’ rally was in full swing. We’d procured some cheap bourbon that morning from a local convenience store – an impossible feat in Canada – to help put hair on our dogs and keep our blood warm. While the temperature was only slightly below freezing outside, the mood of the crowd was heated. The deejays MC’ing the event were ginning up the openly imbibing fans by leading profane chants directed at Modell and his son David, effigies of whom were visible on the stage set up at the far end of the lot.

David’s effigy had a noose around his neck, while Art was strapped to an electric chair. (It might have been the other way around. Like I said: bourbon.) After a suitable buildup, David’s trapdoor was sprung and the switch on Art’s chair was flicked, and each dummy jerked and flailed appropriately while the crowd roared its approval. The bloodlust in the air prompted my mind to recall accounts I’d read of deep-south lynchings, although my testicles had long since retreated inside my torso to stay warm, something no Mississippi redneck had likely ever had to contend with.

IS THAT A ROMAN CANDLE IN YOUR POCKET, OR ARE YOU JUST GLAD TO SEE ME?
Following the rally, we made another bourbon run to fortify us for the long game ahead. The first sign that something was amiss came at the stadium gates. We’d taken pains to hide the whiskey on our person, but it was for naught, as security was non-existent: no pat-downs, nothing. Cue foreshadowing.

The game itself wasn’t particularly memorable, at least until the second half began. That’s when a strange noise reverberated throughout the stadium, a low buzzing accompanied by faint vibrations. Shortly thereafter, the source became apparent. Numerous fans had smuggled in hacksaws and crowbars, and were using them to liberate their seats from their moorings. Whether they originally intended to take the things home as souvenirs, somewhere along the line the plan changed to ‘let’s hurl the things onto the field.‘

Some fans pitched the seats from way up high, leaving them to tumble and bounce down the aisle steps to field level. Others methodically passed the seats down via a sea of hands until the fans in the lower tiers pitched the things onto the turf. I saw a contiguous block of half-a-dozen seats passed down this way. Suffice it to say, things were getting out of hand, and no one appeared to be doing anything about it.

Suddenly, we heard loud popping sounds. Being a Canadian, my initial reaction was that some Smith & Wesson-wielding nutbar was choosing to exercise what he believed was his 2nd Amendment rights, but I forgot my plan to use Bob as body armor once I noticed the smoke from the cherry bombs and M-80s exploding on the turf.

As the action on the field drove the ball towards the infamous Dawg Pound, the barrage of fan-hurled missiles (explosive and otherwise) became so great that the refs held an impromptu on-field conference, ultimately deciding to switch ends to give the fans in the other end zone an opportunity to attempt their best Hail Cherry throws.

ENDGAME
As the game wound down, the Cleveland police attempted a show of strength. Rows of cops lined up behind each team’s bench, facing the crowd. It was something, I suppose, but the ratio of 50 cops to 55k rowdy fans baying for blood reminded me of that old Doors lyric: They got the guns but we got the numbers. How would the cops react if fans started pouring over the rails onto the field?

As the teams walked off into their dressing rooms, the fans lingered behind, and reality appeared to be dawning in the minds of many that their once-beloved Browns had cruelly abandoned them for another city. Nearby, I could hear fans openly discussing how best to set the rickety wooden stadium afire. While I glanced around to work out the best exit strategy, I stayed where I was, curious to see what would happen.

In the end, the players saved the day. Whether they were ordered to do so or just decided on their own, the Browns returned to the field, helmets raised in salute to their long-suffering fans. Almost immediately, the mood changed. Threats turned to cheers, and misty sentimentality ultimately quenched the fans’ thirst for revenge.

After filing out of the stadium, we hit the Flats for the epic wake that followed. Once again, the distance we’d traveled made us minor celebrities in every bar we visited, and I could have even got laid that night had Bob not vomited on the girl’s shoes. In the morning, Bob and I loaded up on souvenir copies of the Plain-Dealer and drove back to T.O.. All in all, it was as memorable an experience as my visit to Buffalo’s Rich Stadium the year prior, when I sat through one of the top-10 coldest games in NFL history (Bills v. Raiders, 0° Fahrenheit, -32° windchill). But that’s another story…