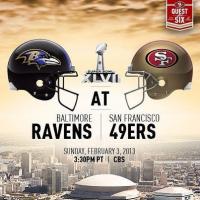 As NFL playoffs go, 2013’s glut of games has been some of the most memorable in recent history. The first round of the playoffs pulled the proverbial rabbit from the hat with the Ravens v Broncos Double OT game. If that wasn’t enough the following day served up an even more impressive clash between the Seahawks and Falcons that left us Brits wondering whether we should actually start watching this rugby with pads malarkey. That was before you mention there were two other games, between the 49ers and Packers and the Patriots and Texans that threw up more than enough to natter about.

The past weekend saw the semi-finals as the Patriots hosted the Ravens and the 49ers visited the Falcons to decide who would contest the Super Bowl. As we know now the 49ers and Ravens both prevailed on the road and made sure the game will be quite the family love-in, in the big easy. Before the games took place we asked our readers which Super Bowl match-up they wanted to see the most. Were they right though?

Well, only 5 percent voted for a Bowl that would have featured the Patriots and Falcons – the two sides that lost at the weekend.

13 percent of readers said that a bird bowl between the Falcons and Ravens would be their preference.

30 percent voted that a Ravens v 49ers game between the two Harbaugh boys.

The overwhelming majority of you wanted to see the 49ers and Patriots renew hostilities with 51 percent of you voting for the two to face each other in New Orleans.

For the remainder of the week we turn our attention to the burgeoning casino industry off the coast of China, in Macau, and ask which of the US firms in the region will have the most fruitful 2013.