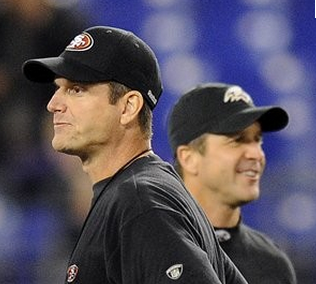 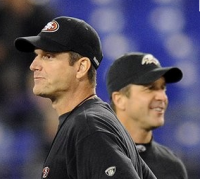 Super Bowl XLVII has officially been rechristened as the Harbaugh Bowl.

The brothers Harbaugh – John and Jim – are leading their respective teams to New Orleans for what could become a Super Bowl like no other. Jim’s San Francisco 49ers booked their ticket to the Big Easy with a tough and gritty come-from-behind victory past the Atlanta Falcons while John’s Baltimore Ravens blanked the heavily favored New England Patriots in the second half, setting up a dramatic championship game that now has more story lines than a season’s worth of Melrose Place episodes.

The enormous amount of subplots now includes the NFC champions opening as a 4.5- to 5-point favorite against its AFC counterpart, a number that could swing both ways in the next two weeks leading up the big day on February 3. Even in the few hours after the lines were initially posted, activity was already causing shifts in lines from a number of bookmakers with a lot of the books eventually setting it at Niners -4.5.

The early movement appeared to back the Ravens after beating the Patriots pretty handily at Foxborough on the strength of a 21-0 blanking in the second half. Jay Hood, MGM’s sports book director, told Sporing News that the expectations from the books will be early money on the Ravens with 49ers money expected to come in as soon as the line shifts in their favor.

Those who picked the two teams before the season started to win the Super Bowl are undoubtedly licking their chops at potential windfall of winnings headed their way. San Francisco opened the season with 17/ odds whereas the Ravens were 14/1. Backers of the Ravens entering the play-offs even hotter odds when the team, after sputtering towards the end of season, were one of the long shots at 25/1.

With two weeks’ worth of time before the actual kick-off, the question is always how much handle will be in play when the game kicks off on February 3. Last year’s Super Bowl generated the second largest handle in Nevada sportsbook history, with total wagers coming in at $93.9m. The record still remains the $94.5 million bet on Super Bowl XL between the Seattle Seahawks and the Pittsburgh Steelers, although that record was set before the recession.

We don’t expect this year’s total to eclipse that figure because the teams involved in that game – the Patriots and the New York Giants – are both heavy public teams compared to this game where the Ravens aren’t really considered a public team the way the Pats, Giants, and in this case, the 49ers are. But if there’s a chance for this game to eclipse last year’s totals, bank on the endless media coverage surrounding Ray Lewis’ final game of his illustrious career. Nothing gets the public more emotionally invested in a high-stakes game than a good storyline.

And in the case of the 49ers and the Ravens, you can take your pick which one to ride with. Whether its the Harbaugh Bowl, the Ray Lewis retirement game, or Colin Kaepernick putting an emphatic exclamation point to a stunning season, Super Bowl XLVII will offer fans and bettors plenty of things to talk about in the next two weeks.