Home / Casino / Sands Bethlehem reportedly on the block; Louisiana casinos earn $2.4b in 2012 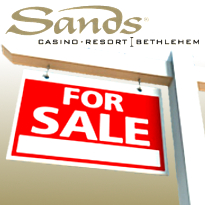 Pennsylvania’s $3.16b in casino gambling revenue in 2012 allowed it to keep its second banana status on the state gambling revenue charts, behind Nevada and ahead of New Jersey. Among the state’s 11 casinos, Las Vegas Sands’ Sands Casino Resort Bethlehem was a top earner, taking in $291.5m in slots revenue – second only behind the $384.5m at Bucks County’s Parx Casino – while Sands led the table game revenue tally with $146.5m (topping Parx’s $109.9m). Small wonder that Sands Bethlehem produced a 13.4% rise in net revenue to $122m in the company’s most recent quarterly financial statement.

Which makes it all the more strange that rumors are swirling of a potential sale of Sands Bethlehem. On Thursday, Bloomberg’s Chris Palmeri reported that Sands Bethlehem was quietly being shopped with an estimated $1b sticker price. In the 12 months ending Sept. 30, Sands Bethlehem reported EBITDA of $109m, and recent casino sales outside Nevada have gone for around 7.5x EBITDA, placing Sands Bethlehem’s value around $817m. LVS spokesman Ron Reese wouldn’t bite when asked to confirm the rumor, stating only that the company was “proud of the financial results the property has achieved and the role we have played as a community partner there.”

So what gives? Is LVS that spooked by the threat of added regional competition from New York’s proposed three upstate casinos? Or is LVS just streamlining operations as it prepares to break ground on its EuroVegas mega-project in Spain? Perhaps the newly documented return of VIP gamblers to Macau’s shores means LVS can afford to shed the lesser US casinos in its portfolio. Or maybe LVS supremo Sheldon Adelson is just tired of the US’ penchant for digging through his files. Just today, the muckrakers at Truth-Out.org are asking why $24m was apparently funneled through the non-profit Adelson Clinic for Drug Abuse Treatment and Research (run by Sheldon’s wife Dr. Miriam Adelson) to Republican-associated political groups in 2012.

LVS has no casinos in Louisiana, but the state is doing just fine without him so far. On Thursday, Louisiana regulators reported that its non-tribal casinos took in $2.4b in gaming revenue in 2012, up marginally from 2011’s $2.37b. Caesars Entertainment’s Harrah’s New Orleans took in $338.9m, while the 13 state-licensed riverboat casinos earned $1.6b and the four racinos added another $405m.