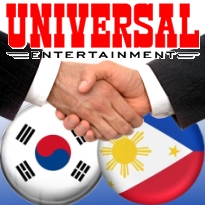 Japanese pachinko manufacturer/casino operator Universal Entertainment has firmed up its plans to construct an integrated resort casino in South Korea’s ambitious 8City project on an island in the Incheon Free Economic Zone. Last week, Universal signed a non-disclosure agreement with the Shinsegae Group, one of South Korea’s leading retail shopping outfits. The deal is a prerequisite to commencing discussions regarding the retail and dining adjuncts of Universal’s proposed Incheon casino.

Meanwhile, over in the Philippines, Universal and its boss Kazuo Okada are still being investigated by politicians and legal watchdogs over allegations of bribery involving Universal’s casino project in the Philippine Amusement and Gaming Corp’s (PAGCOR) Entertainment City development in Manila Bay. Universal maintains that it will eventually be vindicated, and work on its Manila Bay Resorts project is proceeding as if nothing is amiss.

To underscore their commitment to seeing the project through, Universal has announced a deal with Robinsons Land Corp., the property development company controlled by the Philippines’ third-richest man, John Gokongwei Jr. While the financial terms of the deal were not disclosed, Universal issued a note to the Tokyo Stock Exchange that said Robinsons would assume a minority stake in Universal’s Philippine subsidiary Tiger Resorts, Leisure and Entertainment Inc. and a 60% stake in Eagle I Land Holdings Inc., the company that owns the 30 hectares of land on which the resort casino is being built. Robinsons will be responsible for developing the project’s non-gaming commercial and residential facilities, including a budget hotel. Assuming due diligence turns up no sign that the property was once an ancient burial ground or toxic waste dump, the contract will be finalized on January 31, 2013.

The land deal was necessary to abide by the Philippine constitutional provision limiting foreign companies from owning more than 40% of any local venture. Assuming investigators eventually give Universal the ‘all clear’ on the bribery allegations, the provisional license PAGCOR issued to the Tiger Resorts’ Entertainment City project can be supplanted by a more permanent license. Manila Bay Resorts anticipates a launch sometime in 2015. The three other Entertainment City casino projects – Bloomberry Resorts’ Solaire Manila, Belle Corp and Melco Crown’s Belle Grande, plus Genting and Alliance Global Group’s Resorts World Bayshore – are expected to launch in March 2013, H1 2014 and 2016, respectively.