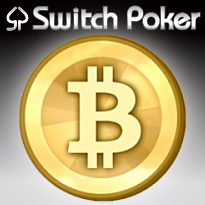 It was over a year ago that online poker site Switch Poker began offering players the option to deposit and withdraw using the Bitcoin virtual currency, and the site has now expanded their embrace of the non-fiat currency to include Bitcoin-only tables. The Switch Poker site’s blog posted a notice this week that it was responding to requests from Bitcoin devotees to eliminate the mandatory Bitcoin-to-Euro conversion in order to play (and the Euro-to-Bitcoin conversion when players decided to cash out). Switch Poker players can now enjoy dedicated ฿0.01/฿0.02 (roughly €0.10/€0.20) no-limit hold’em 6-max tables. Bitcoin virgins who wish to join these tables will first need to convert their otherwise useless Euros, a turnabout that is bound to warm the cockles of any Bitcoin nerd’s heart.

Infiniti Poker is another poker site that’s looking to hop on the Bitcoin bandwagon. Founder Michael Hajduk told PokerFuse Bitcoin would be the only deposit option available to Infiniti’s US players, a tactic Hajduk believes will help circumvent those pesky US anti-gambling laws. “In the worst case scenario, if [the US Department of Justice] seize our domain name your Bitcoins will be safe because there’s no central authority controlling the currency.” Hajduk claims to have partnered with a leading online Bitcoin wallet to ensure depositing and withdrawing is as painless as possible, but the site has been stuck in beta mode for what seems like an eternity and Infiniti’s actual launch date remains something of a moving target.

It’s not just online gaming sites that are adopting Bitcoin. Two weeks ago, the popular WordPress online publishing service announced it would begin accepting Bitcoin as payment for various upgrades. WordPress spokesman Andy Skelton noted that “PayPal alone blocks access from over 60 countries and many credit card companies have similar restrictions … We don’t think an individual blogger from Haiti, Ethiopia or Kenya should have diminished access to the blogosphere because of payment issues they can’t control.” The greater degree of anonymity Bitcoin provides will (literally) be a lifesaver for bloggers living under repressive free-speech-hating regimes, whose identities and locations would be subject to disclosure via the requirements of more traditional online payment methods.

WILL BITCOIN MILESTONE CAUSE THEIR VALUE TO SOAR?
Bitcoin itself passed a milestone this week, with some 10.5m Bitcoins now in circulation. In case you aren’t aware, Bitcoins can be ‘mined’ by solving complex mathematical equations on the Bitcoin network, after which a ‘block’ is added to the Bitcoin database and the ‘miner’ receives a reward in the form of Bitcoins. (Mining is a necessary component of the network’s security, which is why there’s a reward for block creation. A more in-depth explanation of this can be found here.) Naturally, this has led to dedicated/greedy miners harnessing banks of sophisticated computers equipped with custom designed graphics cards to process blocks more efficiently, but Bitcoin’s unknown and extremely forward-looking designers built safeguards into their system to handle such inevitabilities of human nature.

This week, the number of Bitcoin blocks in existence topped 210k, automatically triggering a mechanism that halved the number of Bitcoins released via block-creation rewards from 50 to 25. In other words, it now takes twice as much work to achieve the same reward, and the system is designed to keep reducing the rewards as further milestones are surpassed, making mining for mining’s sake less and less financially attractive. The number of Bitcoins will reach a permanent cap of 21m by the year 2140, after which mining will no longer generate any reward beyond the ongoing maintenance of the network.

Bitcoin’s designers envisioned their baby as less of a traditional fiat currency and more a commodity like gold, of which there is a finite amount. As such, there will be rises and falls in Bitcoin’s value, but no wild inflationary surges. This theory will be tested as a result of this week’s changes. Some observers believe the smaller number of Bitcoins now being generated will cause the value of existing Bitcoins to skyrocket, and indeed, their value has risen about 10% in the two weeks preceding the 210k milestone. But others believe that since the majority of users – 78%, according to one study – appear to have been hoarding Bitcoins in anticipation of selling them once their value rises, the resulting flood of Bitcoins into the market will have a dampening effect. Only time will tell who’s right. Regardless, it’s a fascinating technological experiment that bears watching.