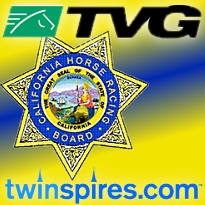 Champagne corks are a-poppin’ at Betfair headquarters following Thursday’s unanimous decision by the California Horse Racing Board (CHRB) to finally allow exchange wagering to go forward at state racetracks. Bettors in other states could also make exchange wagers on California races online, assuming their home states determine such activities are legal. California’s legislature approved exchange wagering over two years ago, but implementation has been slow in coming, due mainly to fears by owners and trainers that the additional betting option would cannibalize parimutuel revenues. The decision could lead to exchange wagering in the second half of 2013, but the CHRB’s decision still needs to be approved by the Office of Administrative Law, a process that will take at least two months. The delay will provide opponents an opportunity to challenge the CHRB ruling.

CDI is reportedly on the fence about whether it wants to commit to the scheme, and has been given 10 days in which to make up its mind. CDI VP Brad Blackwell had previously stated his doubts about whether exchange wagering was a net good for the industry, and the company had applied for a license primarily with the aim of maintaining parity with TVG should the peer-to-peer option become reality. CDI noted the costs associated with setting up its own exchange wagering platform in last week’s Q3 earnings report.

Any company wishing to offer exchange betting will need to partner with a racing association and gain the support of a horsemen’s group, such as the Thoroughbred Owners of California, which as recently as June expressed concerns that exchange wagering allows punters to bet on a horse to lose, potentially subjecting owners and trainers to unwarranted (and unwanted) extra scrutiny. TVG stated that it has the support of standardbred track Cal-Expo, quarter-horse track Los Alamitos and their respective horsemen’s groups, but thoroughbred support has been slow in coming. Betfair owns the Hollywood Park thoroughbred track, but the track’s horsemen have yet to give their assent. Del Mar Thoroughbred Club senior VP Josh Rubinstein told the North County Times his outfit is “interested in looking at anything that helps horse racing … if exchange wagering is approved, we’ll look at it.”