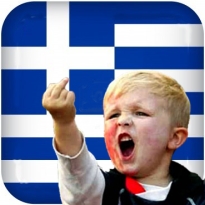 Truly, this week is only a couple days old but the board of directors at Bwin.party digital entertainment likely already wishes it was over. As co-CEO Norbert Teufelberger beats an inglorious retreat to the UK following his detention by Belgian police, Greece is now telling Bwin.party and other unlicensed operators serving Greek punters to get the hell out of Dodge (and Athens) by Dec. 6 or face a decade in prison, up to €500k in fines and ‘severe administration penalties,’ which we assume means being forced to untangle the country’s messy finances using only a slide rule and a No. 2 pencil.

The Hellenic Gaming Commission issued warning notices on Nov. 5 to all operators currently serving the Greek market without the government’s say-so. These operators are being given a one-month grace period in which to wind down their affairs, after which any operators still serving the market will be put on a blacklist (much as in Belgium). Banks will be forbidden to process transactions for any company on the blacklist and IP-blocking will cut off punter access. The Commission’s notice said it was asking for support from other EU regulators “and will appreciate proactivity” by same “to inform and strongly advise” operators they regulate to comply with Greek wishes.

Greece passed a new gaming law in August 2011, which was supposed to be followed by a public tender for online gaming licenses. While that has yet to occur, Greece issued temporary permits to 24 operators – including Sportingbet and Paddy Power – on the condition that they ante up two years of back taxes (similar to what transpired in Spain). Other major European operators, including Betfair, Bet365 and William Hill, chose instead to file a grievance (via the Remote Gambling Association) with the European Commission over what they viewed as the Greek gaming law’s discriminatory provisions.

IS THE BWIN.PARTY OVER?
Bwin.party, reportedly Greece’s online gambling market leader, also chose not to apply for a license and filed its own EC complaint in November via its European Gaming and Betting Association (EGBA) mouthpiece. Unless Bwin.party has learned a lesson from Tuesday’s strong-arm tactics in Belgium, a business-as-usual approach in Greece would result in its name appearing on yet another blacklist and creating another no-fly zone for Bwin.party execs.

With Bwin.party’s Nevada online poker tech provider license application hearing expected sometime early in the new year, shareholders are likely starting to wonder if Bwin.party execs are treating the hearing as a foregone conclusion. If continued nose-thumbing at European regulators ultimately proves too blatant for US regulators to ignore and eliminates the possibility of Bwin.party adding a US revenue stream, could the next Bwin.party AGM be a bring-your-own-pitchfork-and-torch affair? (Entirely uncorroborated scuttlebutt has Teufelberger’s arrest the result of a tipoff Belgian authorities received from co-CEO Jim Ryan, who is presumably itching to ditch the ‘co-‘ from his business card.)

Of course, the public companies currently doing business in Greece will eventually ‘choose’ to leave, much in the way one ‘chooses’ to keep breathing. Their shareholders have no appetite for risk and video clips of senior management being frog-marched away in handcuffs tend to have a depressing effect on share prices. Public protestations about ‘illegal’ laws don’t mean much in practical terms; it’s been seven years since the World Trade Organization declared the US anti-online gambling stance to be a breach of international trade rules yet Antigua still hasn’t received its rightful redress.

WHERE DOES PLAYTECH FIT IN?
It will be interesting to see how the Greeks treat Playtech, which, via its partnership with German outfit Gauselmann, is one of eight prospective bidders for the Greek government’s one-third stake in lottery/betting monopoly OPAP. Playtech also supplies technology to a number of Greek-facing operators, including (for the moment) William Hill Online. If Playtech licensees choose to ignore the Greek blacklist, would Playtech escape criticism and/or legal action?

In the past, Playtech has taken an “it’s our clients that are breaking the law, not us” stance regarding its revenue streams from licensees operating in China, Malaysia and Germany, but much will depend on how broadly Greece chooses to define ‘operator.’ As with Bwin.party’s Belgian brouhaha, the fallout from the Greek clampdown may extend well beyond its borders. The fact that Playtech founder Teddy Sagi did time in an Israeli prison in the 1990s for stock manipulation was noted by Nevada regulators when William Hill’s sports betting license was being considered and further European controversy might eliminate any possibility of Playtech participating in a regulated US online poker market.