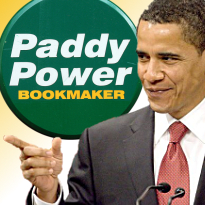 Irish bookies Paddy Power have announced they will pay out on wagers that US President Barack Obama will be reelected on Tuesday. The eponymous Mr. Paddy Power said Obama’s Republican challenger Mitt Romney “gave it a good shot and is doing well in the popular vote, but we suspect he’s had his moment in the sun and is likely to be remembered more for his legendary gaffes than presidential potential.” Paddy’s bold PR gambit could cost the bookmaker €650k if Romney defies their expectations.

Tuesday’s outcome has yet to be called at William Hill, where spokesman Graham Sharpe says money continues to come in on both sides of the partisan divide. An unidentified Russian punter has a total of £16,500 riding on an Obama victory, and despite Hills making Obama a 1:4 favorite, Hills has received five-figure wagers on Obama from punters in France, Belgium and Norway. He or she may have been voting more with their heart than their head, but a diehard Romney backer recently put down £15k at 3/1 odds. Prediction market Intrade gives Obama a 64.1% chance of winning another four years in the Oval Office, while betting exchange Betfair has Obama a 77.2% favorite. The Iowa Electronic Markets – the only stateside real-money prediction market that tackles electoral races – gives Obama a 71.4% shot.

NATE SILVER SAYS OBAMA A SHOE-IN
While polls have shown the US popular vote more or less evenly split between the two candidates, it’s the electoral college tally that elects presidents. Nate Silver, the math geek behind the influential FiveThirtyEight blog who was spot on with his 2008 electoral college predictions, upped Obama’s odds of reelection from 80.9% to 85.1% this weekend. While Silver insists his methodology is based on pure math, his consistent prediction that Obama has it in the bag has drawn the ire of GOP partisans. Late last week, Silver – who has admitted having an affinity for the game of poker – reacted to right-leaning MSNBC host Joe Scarborough’s claim that the election was a “toss-up” by challenging Scarborough to wager $1k on Romney, with the winner donating the funds to the American Red Cross. Scarborough dodged the issue, suggesting each man simply donate $1k. Silver doubled down, suggesting they bet $2k with the Red Cross as the beneficiary.

NEVADA GOP SENATOR HELLER FACING NAILBITER
Obama’s reelection would fulfill one-third of the requirements most observers feel are prerequisites for Sen. Harry Reid’s online poker bill to have any chance of passage in the lame duck session of Congress following Tuesday’s poll. The other two factors are borderline contradictory: the Democrats retaining control of the Senate and Sen. Dean Heller (R-NV) fending off the challenge of Rep. Shelley Berkley. (Silver puts the odds of the Democrats retaining their Senate majority at 91.5% and Heller’s shot at reelection at 77%.) Heller is Reid’s online poker frenemy, tasked by Reid with drumming up GOP support for the poker bill yet Reid has not shied away from casting Heller in a bad light on the poker issue in a bid to boost Berkley’s chances. On Sunday, Nevada journalist Jon Ralston predicted Obama would easily carry Nevada but was less bullish on Heller’s chances, saying he ‘would not be surprised” to see Berkley triumph and “there may even be a recount – it is so close.”

BILLY WALTERS BETTING BIG ON LOCAL RACES
On a smaller electoral scale, the Las Vegas Review-Journal’s Lawrence Mower recently studied donations designed to influence Nevada’s County Commission races and while most of the big money came from the state’s casino giants, one individual’s name stuck out. Legendary sports betting whale Billy Walters contributed $25k (through five separate companies) to help reelect commissioner Larry Brown and a further $5k to commissioner Tom Collins, making Walters the eighth-largest donor to the Commission races. Walters, who also develops golf courses in the state, told the LVR-J he considered his contributions to be “investments” rather than donations. “The bottom line is, if you own a business in Las Vegas, if you have employees in Las Vegas … the most important people in the world to you are the people who run local government. If you don’t have good local elected officials, it’s very difficult to run a business. Anybody who looks at it any different doesn’t know what they’re doing.”