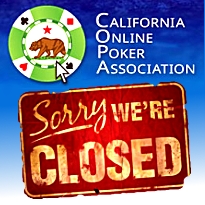 The board of the California Online Poker Association (COPA) – a motley group of 29 Indian tribes and 31 card rooms – has voted to disband the organization. On Wednesday, California’s San Manuel Band of Serrano Mission Indians made the surprise announcement that it was withdrawing from COPA, which was followed by a similar move by the Morongo Band of Mission Indians. With the two powerful tribes having contributed the bulk of COPA’s financing, their withdrawal left the board members little choice but to call it a day.

The two tribes were reportedly frustrated by the lack of progress in getting the state to pass online poker legislation, although COPA’s insistence on excluding the state’s racetracks from offering online poker was among the chief obstacles to passage of state Sen. Rod Wright’s SB1463 legislation this summer. Pechanga.net editor Victor Rocha tweeted that he’d known about the San Manuel Band’s intentions since the Global Gaming Expo, but that their exit had nonetheless left COPA’s smaller tribal members “blindsided.” Neither the San Manuel nor Morongo band has indicated what sort of solo moves they might be planning. COPA’s calonlinepoker.org site has gone dark, although the Playtech-powered free-play calshark.com site is still functioning.

TRIBES STILL WARY OF HARRY
On Tuesday, tribal leaders from across the US met in Sacramento for the National Conference of American Indians, and chief among the topics for discussion was the prospect of a federally regulated online poker system. The Press-Enterprise quoted Pechanga Band of Luiseno Indians chairman Mark Macarro telling attendees that the “ground is shifting under the gaming world’s feet. We think it’s absolutely critical we get it right the first time.” The consensus of the tribes is that a federal bill must reserve a prominent role for the National Indian Gaming Commission, and they’re not convinced that the bill proposed by Senators Harry Reid (D-NV) and Jon Kyl (R-AZ) meets that standard. The Senate Committee on Indian Affairs released a discussion draft of its own Tribal Online Gaming Act of 2012 in July. Jason Giles, exec director of the National Indian Gaming Association conceded that “internet gaming is coming. But we also want it to be fair.”

WHO’S RIGHT ON STATES’ RIGHTS?
If you’re looking for someone who thinks the Reid/Kyl bill is more than fair, look no further than Nevada Gov. Brian Sandoval. Sandoval has sent letters to the leaders of the Senate (that would be Reid) and the House of Representatives pledging his everlasting love for the bill. “As governor of a state that jealously guards its primacy in the regulation of gaming, I am pleased the proposal maintains state authority to regulate online poker operators built upon a basic federal foundation of common-sense regulatory principles.”

Yes, and considering most would-be online poker operators have already applied for Nevada licenses, Nevada is also jealously guarding the 30% chunk of the proceeds returned to the regulating states under Reid/Kyl. So to sum up, Reid writes a bill that effectively elevates Nevada to the top of the heap, and Sandoval writes Reid a letter that congratulates him for championing states’ rights, despite the fact that the bill champions one state a hell of a lot more than the rest. Wonder if Sandoval was ever a lumberjack, cuz he’s awful good at this logrolling stuff…

Meanwhile, the National Conference of State Legislatures (NCSL) – a true backer of states’ rights – said Reid’s bill is unnecessary. As NCSL committee director James Ward reminded The Hill: “State authority and consumer protection with respect to online gaming are not mutually exclusive. With gaming, states have long demonstrated that they are capable of protecting consumers. This bill is aiming to fix a problem that simply doesn’t exist.”

Also stating their Reid/Kyl objections for the record was the National Governors Association, which sent its own letter to Senate and House leaders on Thursday. “The draft would preempt emerging state regulatory authority recently established by the U.S. Justice Department under a reinterpretation of the federal Wire Act, which could restrict state revenues derived from gaming. We oppose the draft Senate legislation in its current form as an unnecessary preemption of state authority.”