Home / Business / Sands to break ground on EuroVegas in 2013; no tax relief for Spain’s online biz 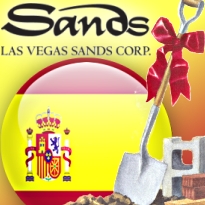 Las Vegas Sands (LVS) says it plans to break ground on its Spanish ‘EuroVegas’ resort casino project by December 2013. The announcement followed a meeting on Tuesday between LVS execs and the local government in Madrid, which says it plans to have the necessary legislation – including a possible waiver of Spain’s tough smoking laws – in place “at the beginning” of 2013. The exact location of the estimated €15b six-casino 12-hotel project has yet to be determined, but the choice has reportedly been narrowed to three currently unused plots of land around the city.

Questions have been raised about whether LVS will be able to secure sufficient financing to cover the 65-75% of the project’s costs that LVS hopes to outsource, but an unidentified source told Agence France Press that LVS isn’t concerned. “They are negotiating with the banks, which already have made some offers. They have the financing, it is just a question of seeing which bank lends them the money most cheaply.” LVS is also reported to be leaning on the Spanish federal government over the issue of taxation. Madrid president Ignacio González told Europa Press that he imagined that the idea of some kind of tax relief “is being considered” by the feds, given the scale of the EuroVegas project and its capacity to take a lot of Spaniards off the dole list.

A TAXING SITUATION
The Spanish government is definitely not considering any tax breaks for the country’s fledgling online gambling market, according to the country’s gaming regulators. Earlier this week in Barcelona, DGoJ general director Enrique Alejo told attendees at Clarion’s World Regulatory Briefing that any alteration to the 25% gross profits tax currently assessed on online gambling operators was a non-starter with tax authorities in the cash-strapped country. (Last week, ratings agency Standard & Poor’s downgraded Spain’s sovereign credit rating to BBB-minus, just a hair above junk bond status.) That said, Alejo promised that the regulator would reappraise the situation in 2013.

GamblingCompliance reports that Alejo also provided delegates with a snapshot of the Spanish online gaming industry, revealing that 33 of its 56 licensees are now in operation. Their combined August turnover amounted to €360m, of which gross gaming revenues came to €15m. Sports betting accounted for around half the total, with poker between 30-35%, casino 15% and TV contest-style games around 5%. Meanwhile, the DGoJ has promised a Dec. 1 deadline for releasing the results of the IT testing to which operators were hurriedly subjected earlier this year.

GOALWIN GOES LIVE
Tax concerns notwithstanding, Ongame Network skin Goalwin has gone live in Spain, after first announcing its Spanish intentions back in June. Spanish affiliate site Poker-Red.com reports that another Goalwin brand, PokerMambo, has also opened for Spanish business, while PokerFuse reports that a third Goalwin brand, PokerLoco, has yet to click its castanets and leap into the bull ring.