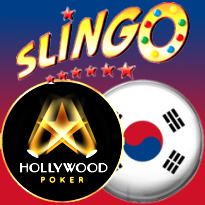 With an aim toward fulfilling promises made this April, social games developer Slingo will make the hyperspace jump from virtual credits to real-money play with Slingo Advance. The new product, which will feature Slingo’s traditional mix of bingo, slots and “advance social dynamics,” is slated to go live in regulated markets sometime before the year is done. Slingo CEO Rich Roberts told eGamingReview that he was attending the European iGaming Congress in order to meet with two suppliers interested in launching Slingo Advance on their platforms, but just as in April, Roberts isn’t tipping his hand as to the identities of that dynamic duo. (In April, those two were believed to be Playtech and GTECH.) Slingo first licensed its free-play offering to Zynga in February.

Speaking of Zynga, former Zynga Poker designer Shawn Carnes has landed a new gig with Plaor, the social game developers behind Hollywood Poker. The real-money version of that site crapped out in June – player deposits were transferred intact to Ongame skin RedKings Poker – but has since reinvented itself as a social poker app that lets you match your poker prowess against film stars like Kevin Pollak, who made a respectable showing in this year’s World Series of Poker.

Irish social games developer OteetO launched Texas Ask’Em Poker on Facebook in May, and is about to release a mobile version for iPhone. In case you were wondering, the “ask’em” tweak involves players being dealt two hole cards, then being challenged to answer a multiple-choice question faster than your opponent(s). The fastest correct answer results in that player receiving a slightly more favorable set of hole cards than his or her opponents, but you still have to play poker well to win. The iPhone launch will take place at this week’s Dublin Web Summit.

Online social poker sites in South Korea are grappling with how to deal with the phenomenon of ‘moneymen’ – players paid by other, less talented and more degenerate players who need someone to chip dump them more than the 300k ‘points’ they’re legally allowed to purchase per month. According to Korea Joongang Daily, an illegal economy has sprung up comprising some 1,000 moneymen, some of which are making out like, er, bandits. According to one such moneyman, “even a beginner in this job could easily earn around 2m won (US $1,800) a month. I have seen cases in which some made over 100m won ($90.5k) a year.” Notices advertising moneyman training sites have even sprung up on South Korean internet forums. Fair warning: chip-dumping – even the virtual kind – is illegal, with transgressors facing a possible jail sentence. And not in Zynga’s PrisonVille, neither.