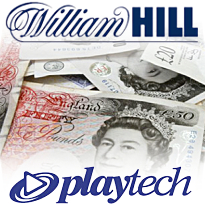 The Political Animals RLFC – a UK rugby league squad that plays for charity and whose members are “parliamentarians, councilors and political staff from all political parties” – have announced that UK bookie William Hill has signed on as the club’s new main sponsor. Club captain (and Leeds North West MP) Greg Mulholland said betting outfits “play a significant role in sport” and that Hills’ sponsorship “enables politicians to experience the game on the field [and] understand what it means to be a player of our great game.” Hills spokesman Lewis Rogers said the company was right chuffed to support the Animals’ “promotion of the sport and charitable work.”

Not to diminish the importance of charitable activity, but Hills may have far more substantive news to announce next week. The bookie is preparing to release its Q3 results on Friday (19) and the Times reports CEO Ralph Topping will use the occasion to announce Hills’ intention to exercise the buy-out option of Playtech’s 29% share of their joint venture, William Hill Online (WHO). The JV partners have had a rocky ride over their four-year relationship, which led to Topping suggesting this February that he wanted WHO’s junior partner – in particular, Playtech’s ‘strategic veto’ – to “disappear.”

The big question Hills-watchers are wondering is just how much buying out Playtech will cost. Analysts have suggested the 29% chunk of WHO is worth anywhere between £230m and £500m. Hills is reportedly preparing to offer £300m, while Playtech (surprise) is expected to demand up to £500m. The negotiations could get interesting, because Playtech has far less experience in selling properties at inflated prices than it has in buying them at inflated prices from founder/largest shareholder/ex-con Teddy Sagi. If the two sides can’t make a deal, their JV agreement allows an independent bank to crunch the numbers and come up with the right price.

Meanwhile, Hills may seek extra time to revive the aborted acquisition of rival operator Sportingbet. Following Sportingbet turning up its nose at last month’s £350m takeover bid from Hills and GVC Holdings, the companies were given until Tuesday (16) to either sweeten their offer – a £400m bid is reportedly being prepared – or admit defeat. But Hills will likely seek an extension from the UK Takeover Panel, possibly to allow it to raise equity with which to fund both the takeover and the Playtech buyout. You know, maybe some of those rugby-playing politicians could have a quiet word on Hills’ behalf with some of their City friends…