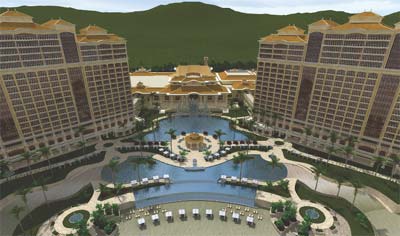 Asian Coast Development Ltd, a Canadian-based company, and MGM Resorts International are scheduled to build a massive, $4 billion casino project in Vietnam with the latter managing the property. The MGM Grand in Vietnam, as it will come to be known, will be built on a beach front strip of land and will be the first large-scale luxury resort of its kind to be built in Vietnam.

In order to appease conditions meted down by the country’s Ministry of Finance, including the location of a casino site should only fall in the areas zoned for gambling and approved by the Prime Minister, investors would also need to have at least $4 billion worth of capital on tap while also possessing ten years of tourism management experience under their belt.

On top of that, investors like ADC and MGM Resorts must also first build and complete construction of whatever tourism, service, and entertainment establishments they plan to set up as part of the entire resorts and casino complex. Only then will they receive their operation license, according to Tuoitrenews.vn.

The online news site also reported that the country’s draft decree, which contains all the aforementioned provisions, will only allow foreigners and overseas Vietnamese holding foreign passports to enter and play in the casinos. While this provision will undoubtedly be detrimental to the projected bottom line, the government’s rationale is to prevent the perceived “ills” of gambling, something, it points out, that even a country like Singapore has failed to adequately prevent.

“[A] casino is a complicated business, though it brings in whopping profits,” economic expert Le Dang Doanh told the online news site. “Even a developed country like Singapore has failed to adequately prevent the negative side of gambling from affecting society.”

While we certainly don’t see the point of curbing gambling through prohibition – we believe its always a personal choice – but hey, if that’s the road they want to take, so be it. But the irony is with that kind of rule, they’re already hampering the casino’s financial expectations.