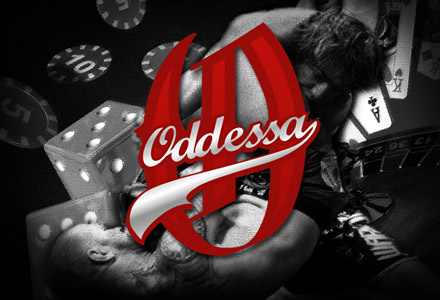 Mixed Martial Arts is one of the fastest growing gambling markets on the planet and one man has seen it as his opportunity to corner that market as the premier oddsmaker for this exciting combat sport.

Joey Oddessa has gone from booking numbers in New York Strip clubs to the world’s premier MMA oddsmaker. His Oddessa Line has become synonymous in mixed martial arts as the Stardust line was for the NFL before it closed down in 2006.

I was able to catch up with Joey Oddessa for a chat about his start in the gambling industry, his interest in combat sports, his move from New York to Costa Rica and of course MMA and the current state of boxing.

In 1989 at just 19-years-old, Oddessa got his start in the sportsbook industry working out of an east coast strip where he learned all the good, the bad and the ugly being both a bookmaker and a bettor. After 10 years of living in the shadows in New York, like so many others of that era, he decided to move to the sunshine of Costa Rica.

At the time, Costa Rica was seen as the new frontier for North American bookies looking to legitimatize their business. The Country was welcoming to the new industry; it was creating jobs for the locals and raising the living standards of the young people able to find jobs in the sportsbook call centres. Oddessa explains his decision to move, “Straight up, I just got tired of anticipating another knocked in door and the legal fees that always accompanied working in a business that just wasn’t legal in some parts of the USA,” Oddessa said. “It became difficult to explain why everyday I’d get up at noon, go to lunch and go to OTB (off track betting). I worked banker’s hours, you know, and then stay out all hours of the night spending the cash and living the good life.” He continues, “Offshore and particularly Costa Rica was a logical choice for me to pursue work in the sportsbook industry since it’s legal here and there are as many sportsbooks as anywhere in the world for a country of its size. Costa Rica turned out to be my first and final drop down after a taste of residing in half a dozen different countries from 1998 to the present.”

Oddessa’s love for combat sports was passed down from his father who coached wrestling and spent most of the 1980’s involved with the US Wrestling team, he had the younger Oddessa on the mat wrestling from the age of eight, “I’ve wrestled half of my life. My dad was and still is a really tough guy. I mean, he was a Vietnam Vet. The interest in the overall fight game went hand in hand; I love the physicality of the wrestling and the mixed martial arts. I grew up in New York. We did a lot of fighting back when there were fewer lawyers and less guns. Now days the losers always press charges.”

With combat sports ingrained in Oddessa from a young age, I asked him where his love of gambling comes from and he was just as candid, “I think you’re born into it, kinda like fighters. I don’t like to use the word gambling much. I like to think when I wager it’s with a huge edge every time I make a play on a fight.”

The competitive nature Oddessa learned from years of wrestling comes out when he talks about his “Oddessa Line”. The Oddessa Line is opening line used by most sportsbooks dealing MMA odds. “My goal for the books isn’t to know who is going to win every fight but rather create the most razor sharp price that generates two-way action. Ultimately, it has guys walking to bridges and grabbing razors while they try to figure out why they’re pulling rabbit ears (empty pockets) at the end of the night. If other sportsbooks want to put their leans and opinions into a number they copy, then I’ll give’em a taste of the player’s plight by betting them until their number’s right. They simply cannot out work me.”

Joey Oddessa started creating his own prices for boxing 20 years ago, before the internet changed the way bookmakers could take action, “There’s a big difference between dealing a number to a clientele of locals who were easy to profile to a global market of players,” Oddessa said. “Mixed Martial Arts was relatively unknown before UFC 1 in 1993. I actually hand wrote wagers in UFC 1 to win the entire tournament. Royce was one of the longest shots at 10-1 to win it all. Shamrock was 3-1 and the Sumo Wrestler Tuli, the biggest fighter in field at 8-1 was bet down as if it (the fight) was (already) over. We all know how that turned out. Royce walked with the $50,000 check and Tuli went to the dentist.”

His reputation among MMA writers and fight news sites has grown, Oddessa is a regular on sports talk shows like Sports Rage and MMA Fighting but it wasn’t always that way, “The Las Vegas Sportsbooks picked up a USA Today spokesperson to preview the odds and the fights, but they were my lines and his gig. Before I came offshore, there was no line on MMA and boxing options were extremely limited. 14 years later it’s fastest growing market on the planet.”

I would be remiss if I didn’t spend some time getting Oddessa to chat about his views on the current state of boxing, the rise of MMA and as a man who has watched and booked well over 10,000 fights some of his most memorable moments.

When you’re booking fights or any sport for that matter, you try to balance the action to protect the house but inevitably, you’re going to be offside on one of the fighters, especially in title fights. Oddessa talks about some of his biggest upsets, “Oh I’ve seen some upsets and been on the right and wrong side of them. Of course, Tyson-Douglas would take top honours. JC Gomez, a 28 to 1 favourite losing to fellow Cuban boxer Yanqui Diaz in 2004 and in MMA George St Pierre losing to Matt Serra, while it wasn’t the biggest MMA upset odds wise, it was the biggest in a title bout. It got bet up from about 7 to 1 favourite to 14-1 by fight time.”

Oddessa has a few extra words about Tyson, “I can say with certainty that no fighter has cost me more money over his career than Mike Tyson in victory and defeat than any other sports franchise or individual in history.” Oddessa continues, “Manny Pacquiao is running a close second, but I’ll get all that back when he steps up to get clowned by Floyd Mayweather Jr.”

The mainstream media and the casual fans are lamenting that boxing is dying and other than the aforementioned Mayweather and Pacquiao who are guaranteed box office draws, the sport’s popularity is waning. Oddessa disagrees and suggests that it’s going global rather than being just an American dominated sport, “I hear the constant debates and cynics saying boxing is dying. Either Klitschko brother could sell out a German Stadium if he fought me. Boxing is alive and well. Global internet access, streams, satellite has made every competitive bout available to watch if you look hard enough. It opens doors for fans and bettors that were limited to a half dozen TV bouts a month now have dozens a week. It’s like the NFL Sunday ticket, if they can watch it, they will bet it. One hand washes the other.”

The access to competitive fights still hasn’t quelled the chatter that boxing can’t compete with the rise in MMA’s popularity, there’s a lack of high-level American boxers in the pipeline and boxing needs a big fix but Oddessa has a few words for the critics, “Boxing is huge around the globe. Sure, it has its hiccups and problems but there’s a ton of talented boxers out there that can carry the sport for years to come. They are two entirely different sports and you will always have the critics. It’s easy to call the plays from the cheap seats and that’s where most of the internet journalists of the 21st century are sitting. Everyone who drinks in a bar thinks they can manage it better. Meanwhile they still spend their money in the same bar talking about it. Send limos for the experts.”

When I used to work in the Costa Rican sportsbooks, boxing would always do bigger numbers than MMA as MMA was a new sport and the bookmakers were leery of getting beat by sharp fans. I asked Oddessa is it still that way or with MMA’s popularity exploding are bookmakers more confident taking MMA action. He also gives us some insight into the global boxing bettor, “In the global market there are the bettors that focus on solely one sport. I find that the casual player will bet on anything they can watch on TV. Some guys bet for entertainment, some for ego, and some for prosperity. Boxing still gets the larger wagers because you can responsibly take a 50k wager on a bout even back when guys like Julio Cesar Chavez and Frankie Randall were fighting. MMA you have to be more responsible with the action. You cannot have a fighter with a 9-4 record against a kid 10-2 and be taking wagers that exceed their purses. It’s irresponsible and opens the doors for nonsense.” Oddessa continues, “That said, I’d be comfortable writing a UFC title bout for 20k on day of the event.”

Manila hosted the OneFC event at the end of August and it was the largest MMA event in the history of Asia. It was a well produced show with a great mix of young up and comers and former UFC veterans like Phil Baroni. Before I closed the interview I wanted to get Oddessa’s thoughts on the global reach of the sport and the potential for an upstart company to make some headway against the UFC juggernaut.

“I’m real proud of Phil. He has been a loyal and close friend of mine for years. Before his time maybe, but he’s still doing what he knows how and doing it to win. As long as organizations know their role, there will always be earns (pay checks) for fighters,” said Oddessa. “Right now, the UFC has the biggest MMA stage on the planet but the opportunity is always there for honest fighters to earn a respectable income in smaller events.”

Oddessa explains the failures of some organizations, “No one fighter can carry an entire organization. In fact, an organization can be put to out to pasture by overpaying for talent and then not having anyone less than say a 6 to 1 favourite to put them in against. Look at the money spent on Fedor (Emelianenko) in the past. It’s tough to make up ground on an investment like that, especially when they find away to get him beat. A marketing machine like the UFC can make a guy irrelevant in the media. I always said if HBO 24/7 could Mayweather-Hatton look like a Pick’em bout, anything is possible.”

Thanks to Joey Oddessa for his insights and if you want to get his reads on fights or hear his real time commentary during UFC Pay-per-views follow him on Twitter.