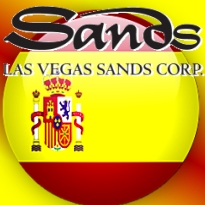 After a protracted bout of public hemming and hawing, casino operator Las Vegas Sands (LVS) has selected a spot just south of Madrid as the site of its hugely ambitious effort to recreate the Las Vegas Strip on European soil. However, the 12-hotel, six-casino, three-golf-course, one-partridge-in-a-pear-tree ‘EuroVegas’ project is far from a done deal, as LVS is only willing to put up 25-35% of the estimated €17b development budget, and nobody’s convinced the already struggling Spanish banking sector will be willing and/or able to make up the difference.

In addition to a significant cash injection, Adelson also wants Spanish smoking laws waived so his chain-smoking Asian baccarat whales don’t have to run outside to the parking lot for a puff in between hands (because, you know, they might use the pause to decide not to drop that extra million on the table). The project will also require changes in local zoning laws regarding the maximum allowable height of buildings. There’s been some suggestion that Adelson chose Spain to host the project in part because the country’s estimated 25% jobless rate means its politicians will be willing to rename the land AdelSpain if it will prevent the money man from picking up his piggy bank and going home.

Left jilted at the altar is Barcelona, which is taking Adelson’s rejection in stride, announcing its own €4.8b resort casino development project even before LVS made its decision public. (You didn’t dump us; we dumped you.) The ‘Barcelona World’ project would consist of six tourist complexes featuring casinos, theme parks, shopping centers, 20k hotel rooms, etc. The project would be backed by the Catalonia government, the La Caixa bank, Enrique Benuelos’ real estate outfit Veremonte plus unidentified “international investors.” But here again, a Catalan finance official told AFP; “Nothing has been signed, we just have an agreement between the parties to go ahead with the project.” Nonetheless, Catalonia’s regional and sustainability minister Lluis Recoder said the project would likely open before EuroVegas, as Barcelona World would be situated in a developed area that required no legislative rejigging to break ground. “The speed of execution of this project is greater than any other that could be on the table.”

SANDS IN DUTCH WITH VEGAS JUDGE
Back in the real Vegas, LVS is in deep doodoo with Clark County District Judge Elizabeth Gonzalez over mishandling of evidence in the wrongful termination suit brought by former Sands China CEO Steven Jacobs. In June, LVS attorneys accidentally let it slip that documents relating to the case that they’d claimed couldn’t be removed from Macau due to the region’s Personal Data Protection Act had actually been transferred to the US back in 2010. Gonzalez made no secret of her displeasure at this revelation, since her court had wasted nearly a year of time and effort weighing the ins and outs of the Macau legislation to determine how to go forward. Gonzalez has scheduled a three-day hearing, set to begin Monday, to determine whether LVS should face sanctions.

Ahead of the hearing, Gonzalez instructed attorneys for the two parties to suggest potential penalties for LVS, should she determine they need to be taken to the woodshed. In court papers viewed by the Las Vegas Review-Journal, LVS attorneys apologized to Gonzalez for pissing her off, but claimed their failure to be “clearer and more detailed” in statements regarding the data “was at most an honest mistake.” To which Jacobs’ attorney Todd Bice, replied: ‘Bullshit.’ (Not a direct quote.) Bice wrote that Sands attorneys “apparently want to claim that the last two years when they hid the ball and made false arguments … are all due to one isolated lapse of judgment by one or two counsel ‘confused’ about an ‘evolving’ foreign law.” When the cockup/subterfuge was first discovered, Bice used one of Adelson’s favorite quotes to suggest a motivation for keeping the data hidden from the court: “It’s not what they know, but what they can prove.”