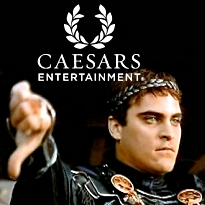 Embattled US casino operator Caesars Entertainment Corp. took another shot to its chin on Wednesday, as ratings agency Fitch downgraded its outlook on the stock from ‘stable’ to ‘negative.’ The move – which follows similar downgrades from other rating services in July and August – was prompted by concerns over Caesars’ ability to honor its crippling $20b+ debt obligations, which are the highest among all casino outfits. With no Macau profits to offset a stagnant US casino market, Caesars’ current revenue streams simply aren’t sufficient to meet the company’s annual $1b+ interest payments, let alone adequately fund Caesars’ existing operations. Caesars stock closed out the day at $6.48, down almost 3% on the day and off nearly 58% from the high it briefly hit following its February IPO.

Fitch Ratings Service analyst Michael Paladino suggested Caesars might seek to buy time by executing debt exchanges for equity, although by this point, finding willing and able investors/suckers may prove tougher than finding a Bigfoot that isn’t just a hillbilly in an ape suit. Paladino also suggested other, less appealing options may be required to right the ship and avoid “potential covenant compliance pressure.” Such remedies include filing for Chapter 11 bankruptcy protection or spinning off the company’s Caesars Interactive division, which controls the World Series of Poker brand, offers social gaming on Facebook via its Playtika offshoot and conducts online gambling operations in the UK in conjunction with 888 Holdings.

Paladino believes that “most of Caesars’ current equity value is attributable” to the Interactive unit, and thus a spin-off “or other means of monetizing the online business could be logical precursors to a restructuring. The parent guarantees [Caesars Entertainment subsidiary Caesars Entertainment Operating Co.] debt and sponsors, if electing to restucture OpCo, would likely want to extract value out of Interactive and not risk the entity being pulled into the restructuring proceedings.”

Fitch notes that Caesars Interactive “would benefit materially if online gaming is legalized on the federal level in the US.” But that scenario appears unlikely, given the Republican National Committee put its opposition to online gambling in print last week. Federal poker backer Sen. Harry Reid (D-NV) reportedly needs 10-20 GOP Senate votes to guarantee passage of an online poker bill in the 2012 lame duck session of Congress, and an unnamed Democratic aide recently told the Las Vegas Review-Journal that Reid can currently count on just two GOP allies – the online poker bill’s co-author Jon Kyl (R-AZ) and Reid’s Nevada counterpart Dean Heller. So Reid is unlikely to be able to ride to Caesars’ rescue, even if Caesars CEO Gary Loveman manages to squeeze himself into Bonnie Tyler’s dress and belt out a cringe-worthy 1980’s tune in one of Caesars’ karaoke lounges…