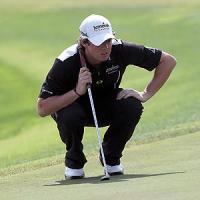 For all the pomp and buzz surrounding Tiger Woods and his quest for that elusive 15th major title, we’ve seen pretty much the same formula from the former world number 1 this year. Get out to a fast start in the first two rounds and begin teasing us of a breakthrough before fizzling out in the final two rounds and going out on a whimper. Predictable.

So it surely wasn’t surprising that Woods followed that script at the 2012 PGA Championship, breaking out to the top of the leader board after the second round of the tournament and faltering in the third round on his way to finishing tied for 11th. Again. Predictable.

But the story of the weekend belonged to young hotshot Rory McIlroy who ran away with the title with a -13 score, a record eight shots ahead of second place finisher David Lynn. More importantly, at least for those who backed the 23-year old Irish golfer, McIlroy’s emphatic win allowed those bettors to cash in on a remarkable 25/1 odds.

Can you say “cha-ching”?

McIlroy’s third and fourth round, when he scored -5 and -6, respectively, were the kind of tour de force performances that we’ve come accustomed from Tiger Woods in the past. But post-hydrant, we’ve only seen shades of that brilliance mixed in with unfathomable inconsistency from the once dominant golfer.

But make no mistake, McIlroy virtually owned this tournament and punctuated it with one of the most resounding finishes in recent major championship history. It’s not the kind of 25/1 odds that had luck written all over it; it was an incredible performance back-stopped by tremendous value that bookmakers may have overlooked.

With the win, Rory now sits on two major championships at just 23 years old, leaving him on pace to accumulate as many – if not more? – majors than Woods’ 15 major titles and the ultimate standard bearer, Jack Nicklaus’ 18.

Having said that, it’s still way too soon if McIlroy can have the kind of dominant run that Tiger and Arnie once had in their careers. But if the comes out 25/1 on that happening, who wouldn’t pounce on that?