PokerStars DoJ deal and acquisition of Full Tilt: The day after 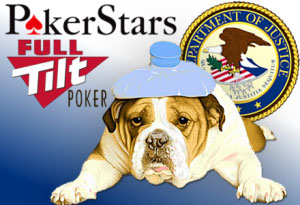 ✖ The rumors regarding Full Tilt Poker (FTP) payment processing director Nelson Burtnick hopping on a New York-bound plane to turn himself in to US authorities turned out to be true. Burtnick was arrested upon his arrival on US soil on Tuesday, appeared in court that same day to plead guilty to the money laundering and bank fraud charges brought against him on April 15, 2011 aka Black Friday. Burtnick was released late in the day on $500k bail (just 20% of what FTP CEO Ray Bitar was required to ante up). Burtnick’s plea means there are now just three of the 11 figures indicted on Black Friday who remain ‘at large’. The terrible trio are: PokerStars’ Isai Scheinberg and Paul Tate, plus Absolute Poker’s Scott Tom.

✖ eGamingReview managed to obtain an internal PokerStars memo written by chairman Mark Scheinberg informing company staff of Tuesday’s developments. Scheinberg described the $741m deal with the US Department of Justice to acquire FTP’s assets as a “unique and exciting opportunity” to “strengthen our reputation and position as the leading global poker destination.” In the same memo, company finance director Michael Hazel noted that Stars now controlled more than half the global online poker market share.

✖ As the euphoria of Tuesday’s news subsides (somewhat), US poker players with money stuck on FTP are anxiously waiting to learn just what hoops the DoJ will make them jump through in order to be reunited with their long-lost funds. Many are pointing to the DoJ’s press release that touted the authorities’ eagerness to provide players with “significant compensation,” which neatly sidesteps any guarantee of full repayment. Outside the obvious suggestion that the DoJ will share the FTP account info with US tax authorities, there’s the question of how the DoJ will view those ‘phantom deposits’, created when FTP credited player accounts despite being unable to withdraw the money from players’ bank accounts due to the DoJ’s crackdown on online poker eCom that began in 2010.

The suggestion has also been made that the DoJ might be willing to refund player deposits, but not any winnings players may have garnered via those deposits, because, you know, online poker kills kittens or something. Poker Players Alliance exec director John Pappas told Forbes’ Nathan Vardi that the latter option would be hypocritical, given that the DoJ allowed PokerStars to refund player balances in full after Black Friday, and was prepared to let FTP do the same, had the money actually been there to refund. Bottom line, the DoJ may simply lack the bean-counting manpower to investigate each account to determine winning players from losing ones.

✖ On Tuesday, Reuters quoted sources saying execs at both bwin.party and 888 Holdings were “angry that PokerStars was set to cash in on the customer loyalty built up in violation of the law.” But only one of these companies appears (so far) to have been significantly impacted. 888 stock closed at 79p on Wednesday, down less than 1%. But bwin.party stock has lost 14p over the past two days, closing Wednesday at 95.9p, a historic low since the merger of Bwin and PartyGaming at the start of April 2011.

David Jennings, an analyst with Irish brokers Davy, believes “the implications of this agreement appear to be negative for bwin.party.” PokerStars’ marketing power will allow it “to resuscitate the severely damaged Full Tilt brand, bringing a fresh competitor back to the European poker market. Secondly, with this agreement in place, Pokerstars’ European licenses now appear to be completely safe. Combined, these two factors mean that the poker revenue line at bwin.party is likely to remain in a state of structural decline.” Noting that bwin.party garnered a quarter of its revenues from poker, Jennings revised his forecasts for bwin.party, suggesting the firm’s poker revenues would drop 11.7% in 2012 and 5% in 2013.