Investing The Hard Way: Why the World Is Coming To An End (Maybe)

In last week’s column I noted the effect that global economic worries have on gambling stocks. For the most part, gambling stocks will outperform the total stock market during times of economic optimism; and fall further when other stocks are tumbling. (This past week proved an exception; despite strength in US stocks, the gambling stock ETF BJK fell, largely due to Las Vegas Sands (LVS)‘ earnings miss.)

Indeed, despite strength in the US and a gain in stock markets worldwide on Friday, economic fears remain front and center for investors – particularly those in the gambling sector. And understanding those fears – their nature, and their potential outcomes – is of paramount importance. There are a lot of dangers for investors worldwide; the high-risk nature of gambling stocks means that the effects of worldwide turmoil will be amplified in the sector. 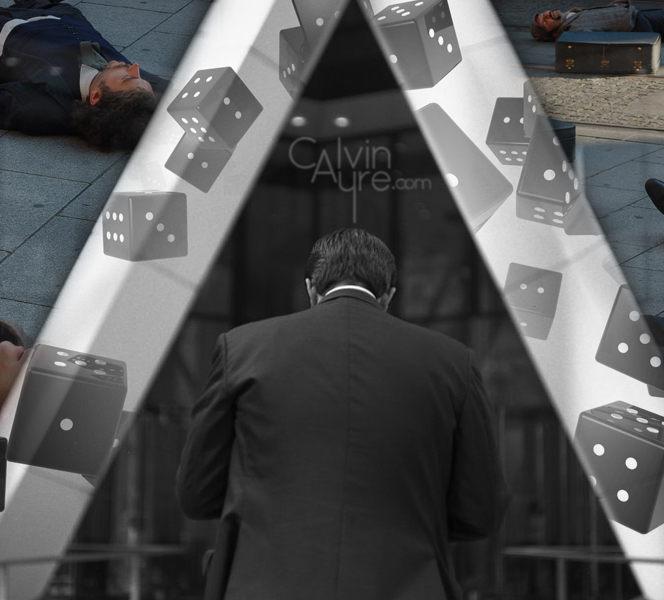 Of course, the most covered, and most discussed, problem is Europe, where budget deficits and skyrocketing unemployment in countries like Greece, Spain, and Italy have led to fears that the euro itself may collapse. Ironically, Friday’s boom in global equities resulted from European news: namely, that Mario Draghi, head of the European Central Bank (ECB), had said the ECB would do “whatever it takes” to keep the eurozone together.

Alas, Draghi did not give details on what exactly the ECB would do; probably because he doesn’t know. Nobody does, which is precisely the problem. The issue in Europe is that its problems stem from the very design of the euro. Vastly different nations – such as austere economic powerhouse Germany and profligate, tax-dodging, serial-defaulting Greece – were united in a common currency. As such, Greece could issue government debt at a rate similar to that of Germany, despite having a far weaker economy and larger budget deficits. The Greeks took advantage of the situation, running huge deficits so that their citizens could retire at age 52 without even bothering to pay their taxes. In different ways, so did the Italians, the Spaniards, and the Portuguese, and whoever else is next in line to scare the shit out of everybody. As the 2008-09 recession hit, and budget deficits across the Continent, investors suddenly realized that a euro lent to Greece might not be worth as much as a euro lent to Germany. Borrowing costs spiked, and the very future of the euro came into question.

The measures taken of late have done little to assuage fears of the eurozone’s eventual dissolution. Greece has received yet another bailout, yet continues to drag its feet on the spending cuts needed to satisfy its lenders. Portugal has also received funds from the ECB and the International Monetary Fund (IMF). Spain has now received a bailout for its banks, totaling as much as 100 million Euros, but more could be needed. Nothing that the ECB has done so far has inspired confidence that the crisis can be resolved quickly; indeed, the most common criticism of European leaders is that they are simply “kicking the can down the road,” propping up bankrupt regimes for the short term without resolving the longer-term issues that have caused the current crisis.

The problem with that criticism is that it is unclear that what exactly European central bankers can do. Germany has been notably uncomfortable – to say the least – with giving aid to what it sees as its reckless, irresponsible southern neighbors. As such, the Germans have rejected more sweeping measures, such as ‘eurobonds,’ in which debts would be backed by all 17 members of the eurozone, as opposed to guarantees from individual nations. Germany claims these bonds would violate EU treaties; even worse, they claim, such a bailout would create so-called ‘moral hazard’. If Greece, Portugal and Spain are bailed out this time, the logic goes, what will keep them from running up more debt in the future? Germany – perhaps, more accurately, Germans – want to make sure that the tax-dodging, vacation-taking, early-retiring southern Europeans learn their lesson.

The problem for Germany is that it is going to pay for the profligacy of its neighbors, one way or the other. The ECB could increase the amount of euros in circulation, by issuing new debt and purchasing it with new euros; this would drive down the euro – already at a two-year low – and devalue the assets of German households. It could take money from Germany and France and directly transfer that money to struggling governments to fund their debts. It could issue eurobonds, which would lower borrowing costs for Spain and Italy but raise them for Germany (as pan-European debt would seem far riskier than debts backed by Germany alone). Or, it could let weaker European countries default, and leave the Euro, which would crush the economies of some of its key trading partners. In short, Germans are going to have give something up, whether they think it’s fai or not.

And here we come to the crux of the Eurozone crisis: Europe lacks a central authority that can actively manage turmoil on the continent, and impose some semblance of order on the bickering parties involved in the crisis. The ECB is hamstrung by EU treaties; the attempted combination of monetary union and fiscal and political sovereignty means that there is no single body that can aggressively and competently tackle a crisis. The Continent is at a crossroads; it must attempt a sweeping, substantial program to rescue and support its struggling economies, or it must let its weaker members go it alone. The middle path – the “muddling through,” as it is called – has created a slow, steady erosion of investor confidence; a long, slow decline in the euro; and unemployment of 24% in Spain and 22% in Greece, with governments who have no tools to promote job creation.

For investors, this uncertainty makes Europe a dangerous place to invest. For gambling stock investors, this economic unease is amplified by the political mess that is gambling regulation on the Continent. As I noted  back in February, the patchwork of laws surrounding online gambling in Europe makes valuing iGaming stocks difficult, if not impossible. That same pattern – conflicts between federal and state lawmakers and vastly different standards between EU members – has led to the Eurozone crisis. Ironically, those very iGaming stocks have been one of the few bright spots on European stock markets as of late. Without a vast change in attitudes on the Continent, it seems unlikely that that strength can continue.

Europe is hardly the only scary continent; in fact, in the gambling sector, it has been Asia that has had the harshest effect on stock prices. Las Vegas Sands and Wynn Resorts (WYNN) are both down over 40% from their 52-week highs, largely due to fears of slowing growth in Macau, the primary earnings driver for both companies. Recent earnings added fuel to the fire; Wynn saw revenues decline in Macau, and although LVS avoided that fate, its gaming revenues fell in Singapore, another key market. LVS wasn’t alone, as Genting Singapore saw its shares hit a two-year low based on similar pessimism about its growth.

Europe is in part contributing to fears of weakness in Asia; the Continent, like the US, is a massive market for Asian exports such as electronics. But the major issue there, of course, is China. The fear is that China, after a massive, centrally planned economic boom driven by construction and government spending, is due for a “hard landing”. The government can’t goose spending forever, the logic goes; without that stimulus, the economy will slow and the Chinese economy should crash.

Economic data from China has shown a slowdown in growth; but, as the New York Times reported last month, there is substantial evidence that the Communist government is inflating its economic statistics to, as the Times wrote, “make very bad economic news look merely bad.”

In short, much of the pessimism towards China appears to be a product of substantially higher expectations. As Forbes noted, economists define a Chinese “hard landing” as back to back quarters of growth below 7 percent, growth that nearly every other country in the world would happily accept. The “slowing growth” in Macau, in particular, still represented a 12% rise in revenue year-over-year, with the mass market segment growing 30% and higher-margin slot machines gaining traction with Chinese gamblers. Despite the fact that Macau-facing stocks continue to fall, they still look to have some value, given that they are trading at a 30-40% discount to their prices earlier this year. No other segment on the gambling industry offers the growth potential that Macau, and to a lesser extent, Singapore offer. For long-term investors, the addition of near-term risk – should China’s economy indeed fall harder than many predict – has been offset by substantially lower prices for the island’s leaders such as LVS and Galaxy Entertainment (GXYEY.PK).

But the bear case for the worldwide economy is rather simple. If Europe implodes, China will see weaker demand for a key trading partner, and its economy will slow. If the Chinese economy slows, its demand for products from the US (and Europe), along with smaller developing countries, will decrease. With turmoil in Europe and China, the struggling economies in the US, South America, and India simply don’t have the firepower to push the global economy forward. With the global financial system still healing from the 2008-09 banking crisis – and still holding substantial amounts of potentially worthless sovereign and commercial debt – the struggles in Europe could cause a “domino effect” that pushes the global economy back into recession, or worse.

It’s a real fear, and one that should be on the mind of investors. Use of the hedging techniques I discussed earlier this year should definitely be considered, but no matter what, caution is definitely warranted. The crisis in Europe can unravel on literally a moment’s notice, and the continuing sluggishness in the US and Asia may not be strong enough to handle such a blow. There’s still plenty of reasons for optimism that Europe – and the world – can continue its slow economic recovery. But if that optimism is wrong, gambling stocks could be hammered.