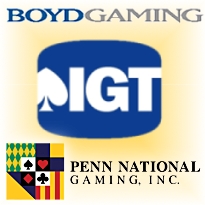 Nevada-based gaming device maker and online poker hopeful International Game Technology reported a 9% revenue gain to $532.8m in their fiscal Q3 ending June 30. Net income fell to $46.9m, off 49% from the same period a year earlier. Revenue from product sales rose 5% to $231.6m, while gaming operations rose 13% to $301.2m, largely on the strength of IGT’s interactive division. A single penny rise – from 24 to 25 cents – in the daily spending habits of players at IGT’s social gaming operation Double Down Casino helped offset a 7% decrease in monthly active users from Q2 to 5.2m. The interactive business was also responsible for most of the 40% increase in total operating expenses to $207.1m.

US casino operator Boyd Gaming saw Q2 net revenues rise 7.1% to $615.2m at its 17 gaming properties, resulting in a net profit of a mere $977k, although that’s better than the $2.95m loss in the same period last year. Boyd’s casinos in the South and Midwest regions outperformed its Las Vegas locals properties, where net revenue fell 2.9% to $149m. Boyd hopes the positive news from the Midwest bodes well for its acquisition of Peninsula Gaming, which operates casinos in Iowa and Kansas. (The Peninsula acquisition is expected to be complete by Q4 2012.) Revenues at the Borgata casino in New Jersey, in which Boyd holds a 50% interest, were $175.4m, down $7.4m from 2011. Boyd shares fell 13% on the news. Boyd also announced it will partner with Sunrise Sports Entertainment, the parent company of the National Hockey League’s Florida Panthers, on a project to bring casino gambling to the facility next door to the club’s arena.