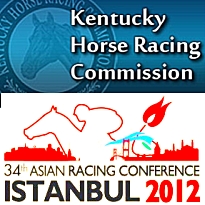 Kentucky Gov. Steve Beshear and the state’s horse racing interests have filed a motion with the Kentucky Supreme Court, asking it to review an appeals court ruling on the state’s instant racing gambling business. In Dec. 2010, a circuit court ruled that instant racing – betting on historical races via video terminals that some have compared to slot machines – was legal, but that decision was appealed by The Family Foundation, a conservative ‘family values’ outfit that objects to anything not depicted in a Norman Rockwell painting. Last month, the Kentucky Court of Appeals ruled in favor of the “I’m agin’ it” crowd and sent the case back to circuit court. Beshear & Co. want the Supremes to quash the appeals court ruling and leave instant racing be. The instant racing option is currently available only at a single track – Kentucky Downs – as the rest of the cash-strapped industry waits for the legal dust to settle before going to the expense of installing the technology.

Across the pond in Istanbul, Turkey, the 34th Asian Racing Conference opened on Wednesday with a warning from Hong Kong Jockey Club CEO and Asian Racing Federation vice-chairman Winfried Engelbrecht-Bresges that racing has lost relevance for new generations of bettors. Despite the online market representing racing’s major potential growth area, Engelbrecht-Bresges says other betting operators “have made better use of technology as an enabler to grow their customer base” and “shown a much better understanding of what new customers desire; they have created relevant content to provide an enhanced experience in line with customer expectations … we must provide a content rich on digital technology to reconnect horseracing, a centuries old game, with today’s customers.” In a nod to the younger demo’s embrace of poker, Engelbrecht-Bresges stressed that horse racing was also a “game of skill, not chance.”

Following up on his CEO’s remarks, HKJC exec director of customer and marketing Richard Cheung said research had shown new customers “find it difficult to visualize the dynamics behind racing, how to understand form and all the little intricacies that make up the racing puzzle.” The younger demographics are also “unaccustomed to searching through printed material for information.” Cheung cited the success HKJC has had with its Race Simulator App, which allows punters to input attributes of various horses in upcoming races, followed by a visual simulation of how such a race might run. Cheung says the app topped the charts in the Hong Kong iTunes Store with over 139k downloads in its first two weeks of availability.

Tabcorp CEO David Attenborough also stressed the need for racing to embrace social and digital media to widen racing’s appeal. Attenborough touted his company’s ‘watch, change and adapt’ approach, which aims to provide a punter with service in whatever location and via whatever format the user demands. However, Attenborough expressed doubts at Engelbrecht-Bresges’ vision for overcoming industry “fragmentation” by forging “six or seven global alliances that will force a stronger integration.” Thoroughbred Daily News quoted Attenborough saying racing was “so divided. I see [integration] as a massive exercise and I’m not sure it can be done.”