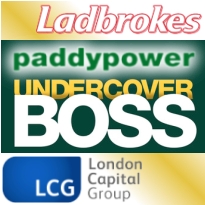 Ladbrokes has teamed up with broadcaster ITV to allow visitors to the channel’s ITV Sport website to wager on sporting events without leaving the site. The pair-up was soft-launched prior to the Euro 2012 kickoff via a bespoke widget that adjusts on the fly to marry the pages that the website visitor loads with the respective odds for that sport. The widget, which was developed in partnership with Fresh 8 Gaming, is also available to mobile ITV Sport viewers. A ‘Bet Now’ tab has also been added to the site’s navigation bar to facilitate easier creation of a Ladbrokes account.

Paddy Power’s new head of operations William Reeves will appear on this Monday’s (July 16th) edition of Channel 4 reality TV series Undercover Boss. Reeves, who has done stints at various levels of Paddy’s operations, was filmed in action during the leadup to Euro 2012, although we’re unlikely to see him measuring the inseam of Danish striker Nicklas Bendtner. According to the C4 site, Reeves “unearths some shocking staff attitudes to punters” while also being forced to deal with employees’ fears over “repeated armed robberies … racial abuse and suicide threats.” Paddy CEO Patrick Kennedy said the project presented the firm with “a unique opportunity to find out what our most important asset, our people really think about the organization.” Kennedy said they were looking for “the unvarnished truth, warts and all, and that’s exactly what we got.” It’s the first time the program has reached beyond the UK to profile execs mingling with the peons.

Shares in spread betting outfit London Capital Group nosedived this week following the company’s warning that its pre-tax profits for the first six months of the year would come in around £2m, down £1m from the same period last year. While LCG’s spread betting and contract-for-difference operations were up 10%, its foreign exchange business income was off 26% and its broking business was up 67%. The news prompted LCG shares to fal 10% to their lowest point in a year before stabilizing.