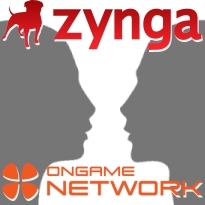 Following last week’s decision by US gaming device maker Shuffle Master to exercise the money-back-guarantee option on its purchase of Bwin.party ‘surplus asset’ Ongame Network, there are reportedly five prospective buyers lined up for a shot at Shuffle Master’s discards. eGaming Review claims that social gaming giant Zynga is out front of this five-man queue (eGR declined to name the other four parties), having paid a visit to Ongame’s Stockholm headquarters last Friday “to commence negotiations.” If accurate, it would mark Zynga’s first foray into what many are touting as the struggling company’s saving grace, i.e. the diversification from free-play social gaming into real-money gambling. Then again, if leaking the news was merely an attempt to temporarily bolster its sagging share price, it failed: Zynga stock dropped nearly 3% on the day.

Assuming Zynga follows through on its alleged purchase plans, how quickly will the knives come out? Ongame carries 200 Swedes on its payroll and reportedly lost around $20m last year. Last week, sources told the Las Vegas Review-Journal that Shuffle Master’s decision to abort the acquisition stemmed in part from the realization that it may have had to eliminate profitable portions of Ongame’s business in order to secure approval of Shuffle Master’s pending application for a Nevada online poker license – much as IGT was compelled to eliminate portions of Swedish poker network Entraction’s business that might have caused Nevada regulators to arch their eyebrows. If, as rumored, Zynga hopes one day to partner with Wynn Resorts on a US-facing online poker site, it will need to ensure its fleece is white as snow.

The convergence between social gaming and online gambling is the focus of a new research project being undertaken by European iGaming Congress & Expo organizer Clarion Events and social and mobile analytics firm Kontagent. The two firms have begun surveying social game developers and real-money gambling operators, with the aim of publishing a white paper and presentation of their findings at the Congress & Expo happening Oct. 16-18 in Barcelona, Spain.