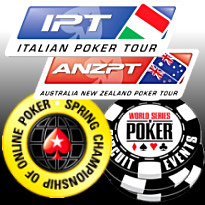 PokerStars pro Viktor ‘Isildur1’ Blom has taken two consecutive events at the PokerStars Spring Championship of Online Poker (SCOOP). While Blom is a formidable online cash games player, Monday saw him claim his first major online tournament scalp by taking SCOOP Event #2, outlasting an 8,240-strong field to earn $247k. The very next day, Blom outplayed a field of 486 to take Event #3, a six-max NLHE, for another $160k. There’s a total of 40 SCOOP events on the docket, leaving a lot more scalps that could potentially be hung on Blom’s lodge pole by the time the competition finishes later this month.

Blom built much of his online reputation by taking millions off Tom ‘Durrr’ Dwan, but Dwan hasn’t let it get him down. PokerPortalAsia reports that Dwan won a US $3.8m pot off a Chinese businessman on Tuesday at the Macau Big Game at the StarWorld Hotel’s Poker King Club. God bless Asian whales…

In Europe, Davide Biscardi has earned €200k for taking the Italian Poker Tour San Remo Grand Final main event. From a field of 417, it came down to the native son against France’s Philippe Clerc, but the final hand saw Biscardi’s pair of eights trump Clerc pair of sixes. Clerc settled for €140k while Polish player Jakub Michalak took third and €81k.

Stateside, Christopher Bonn took top honors at the World Series of Poker Circuit stop in Chester, Pennslvania. A field of 321 created a $467k prize pool, of which Bonn claimed $109k along with his first WSOP-C gold ring and a trip to the National Championship in Vegas in July. Ken Silverstein finished second, earning $67k, while Pete Kaemmerlen took third and $49k. The final stop of the current WSOP-C season gets underway May 18 in New Orleans.

The WSOP National Championship will be among the events the Nevada Gaming Control Board has okayed for bettors to place wagers on the outcome. Last year, bettors were permitted to wager on the Main Event, but this year you can wager on any player participating in the final day of any event, provided you get your bets in five minutes before play starts.

Following Sam Trickett’s announcement that he and Titan Poker had reached an amicable parting of the ways, comes news that fellow Titan pro Marvin Rettenmaier has also left the fold. Rettenmaier tweeted that Titan “has decided to part ways with its Pro Team. I am very thankful for the opportunities and I had a great time representing them.”