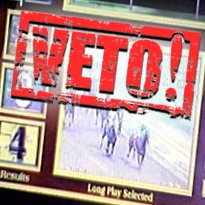 Nebraska Gov. Dave Heineman has vetoed a bill that would have allowed the state’s six racetracks to offer ‘historical’ race betting via video machines. Heineman justified his veto by claiming that Legislative Bill 806 would have expanded the definition of gambling beyond what is permitted under the state constitution. The bill passed the state senate by a vote of 26-18, with five abstentions. To override Heineman’s veto, the bill would require the support of at least 30 senators, which State Sen. Ken Schilz described as “a pretty uphill climb. We’ll just have to see how the chips fall.”

Historical or ‘instant’ racing has become an increasingly desirable feature at financially struggling racetracks. The machines offer punters the ability to wager on randomly selected archival races. Some handicapping info is provided, but not enough to identify the specific date/time of a race. After a punter places his/her wager, he/she can choose to watch as much or as little of the race as desired (hence the ‘instant’ tag), leaving many critics to claim these are slot machines thinly disguised with saddles and spurs. Tracks love them because they provide punters with betting options while waiting for the jockeys to finish throwing up before the next real race.

In Kentucky, instant racing brought in over $15m at Kentucky Downs in March, a $2.5m bump over February’s tally. The windfall allowed the track – the only one in the state currently offering the machines – to add $145k to its real race purses. (It also allowed the state government to add another $225k to its own coffers.) Kentucky Downs’ president Corey Johnson told Kentucky.com that the machines could bring in $150m in 2012 – provided the machines survive a Kentucky Court of Appeals court case on their constitutionality. A conservative ‘family values’ advocacy group, which is staunchly agin’ the machines, has challenged a December 2010 circuit court ruling that instant racing is legal. Oral arguments will be heard April 25, and will be closely watched by the state’s other racetracks, which are itching to add instant racing the instant the court gives its okay.