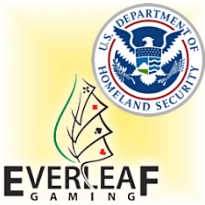 The Everleaf Gaming Network is pulling out of the US market following fund seizures by US Department of Homeland Security. The news broke on the 2+2 forums after a player noted a change in the network’s terms and conditions, specifically: “No person who is resident in Malta, France and USA may open an account, play, or in any other way participate in the ELG offerings and/or services.” Shortly thereafter, Minted Poker rep MintedNeil posted that the network had lost one of its payment processors a few weeks prior and that “some of the processed funds were held back by what is now clear as the Department of Homeland Security, they have now also issued a letter to decease and desist operations in the USA, under threat of legal enforcement against the network.” (Decease? Deceasar salad?)

An official announcement by Everleaf is expected Friday. Meanwhile, MintedNeil claimed that Everleaf and representatives from its regulator, the Maltese Lotteries & Gaming Authority, “will now commence proceedings” with US officials “as to how these funds are returned to players.” MintedNeil maintained that all European funds were safe and operations in Europe would continue, but funds would be converted to euros. The only other noticeable change will be the absence of US players, who reportedly made up 20% of the network’s liquidity.

In other poker news, ChiliPoker has protested its appearance on the Belgian Gaming Commission’s first ‘blacklist’ of online gambling operators that internet service providers are required to block. That list, issued Wednesday, featured Chillipoker.com along with nine other sites, but Chilipoker CEO Alexandre Dreyfus has been making the rounds, claiming that the company didn’t accept (or had deceased accepting) Belgian players, and thus its inclusion on the blacklist was unwarranted.

Sticking with Belgium, QuadJacks reported (via Belgian newspaper Het Laatste Neiuws) that the International Stadiums Poker Tour (ISPT) has officially registered a holding company in Brussels. The ISPT is the goofy 30k-players-playing-poker-via-electronic-tablets-in-Wembley-Stadium pet project of Laurent Tapie, his dad Bernard and colleague Prosper Masquelier. However, the details of the ISPT’s inaugural event remain as murky as the state of the pending deal for Groupe Bernard Tapie to acquire the assets/carbon-frozen-corpse of Full Tilt Poker. According to the Belgian media, the Belgian Gaming Commission has yet to be “informed about the creation of this company.” Given recent events, we half expect GBT to send out its lawyer to issue comments about how Wembley owes the ISPT millions of dollars and the fate of the tournament hinges on the stadium coming across.