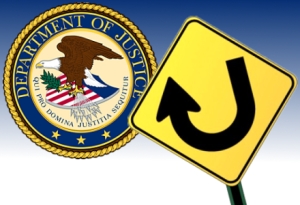 In a dramatic about-face that could have sweeping implications for the online gambling industry, the US Department of Justice now says that the 1961 Wire Act applies only to sports betting. It has long been the stated opinion of the DoJ that the Wire Act prohibited all forms of interstate gambling that took place over the internet, but a new opinion issued by the Assistant Attorney General Virginia A. Seitz states that “interstate transmissions of wire communications that do not relate to a ‘sporting event or contest’ fall outside the reach of the Wire Act.”

The opinion, first made public by Forbes’ Nathan Vardi, was issued on Sept. 20, 2011, in response to a 2009 request for clarification by New York State’s lottery division and the Illinois governor’s office regarding their plans to sell lottery tickets online to residents of their respective states. These plans would have involved the temporary transmission of data outside state lines to out-of-state transaction processors. The DoJ’s Criminal Division felt such a plan would violate the Wire Act, but worried that such a conclusion created conflicts with the provisions of the 2006 Unlawful Internet Gambling Enforcement Act (UIGEA), which specifies that “unlawful internet gambling” does not include bets “initiated and received or otherwise made exclusively within a single State,” and expressly provides that “[t]he intermediate routing of electronic data shall not determine the location or locations in which a bet or wager is initiated, received, or otherwise made.”

After considering this contradiction, Seitz came to the following conclusion: “Because the proposed New York and Illinois lottery proposals do not involve wagering on sporting events or contests, the Wire Act does not, in our view, prohibit them. Given this conclusion, we have not found it necessary to address the Wire Act’s interaction with UIGEA, or to analyze UIGEA in any other respect.”

To support the opinion, Seitz quoted Herbert Miller, former Assistant Attorney General, Criminal Division, who, when Congress was conducting hearings in the 1950s into the relationship between gambling and organized crime, told a Senate hearing that the Wire Act would not apply to lottery-style ‘numbers’ betting because the Act “is limited to sporting events or contests.” Seitz observed that it was reasonable to conclude that the “ordinary meaning of the phrase ‘sporting events or contests’ does not encompass lotteries.”

The question now becomes, what else does the Wire Act not encompass? Poker? Casino games? Will the DoJ now do a similar about-face vis à vis its stance on the ‘poker is a game of luck, not skill’ argument to reclassify poker as a sporting event? Does PartyGaming’s Anurag Dikshit, who pled guilty in 2008 to violating the Wire Act, now file suit against the DoJ for the return (plus interest) of the $300m fine he paid?

DOJ REPONDS TO KYL AND REID LETTER
Not long after the Seitz opinion became public, the DoJ issued a letter addressed to Senators Harry Reid (D-NV) and Jon Kyl (R-AZ) that responded to the senators’ July 14 letter requesting clarification on the DoJ’s stance towards the legality of online gambling in the US. The DoJ’s letter states that the Seitz opinion “provides much needed clarity to those state governments that would like to permit wholly in-state, non-sports internet gambling, including internet lotteries.”

Attempting to save a little face, the letter went on to say the opinion “will not undermine the Department’s efforts to prosecute organized criminal networks. The significant majority of our current and past prosecutions concerning internet gambling involve cases where the gambling activity is part of a larger criminal scheme … Futhermore, in states that ban various forms of gambling – including internet poker – the Department will be able to investigate and prosecute those gambling businesses under the UIGEA and other sections of the criminal code. Of course, if Congress wishes to give the federal government greater enforcement authority over non-sports-related internet gambling, it could do so by amending the Wire Act.”

The timing of this opinion’s appearance and the DoJ’s reponse to Kyl/Reid — coming as it does the day after the Nevada Gaming Commission approved its online poker regulations — is interesting, to say the least. It will no doubt spur more individual states to follow the lead of Nevada and the District of Columbia to get on board the intrastate online poker train. State politicians that were skittish over the DoJ’s protracted silence are suddenly a lot less intimidated. State lotteries — at least, in those states in which poker is not expressly illegal — would appear to be major winners, here. Not surprisingly, the American Gaming Association issued a statement saying (what else) that this was all the more reason to pass federal poker legislation, but we detect a slightly more urgent tone to their message this time.

It’s a habit for governments to release embarrassing information to the press on the Friday before a long weekend, in the hopes that the ensuing media attention will go unnoticed by people away on holiday and not paying attention to nightly newscasts or reading newspapers. Suffice it to say, in this case, at least, fat fucking chance.