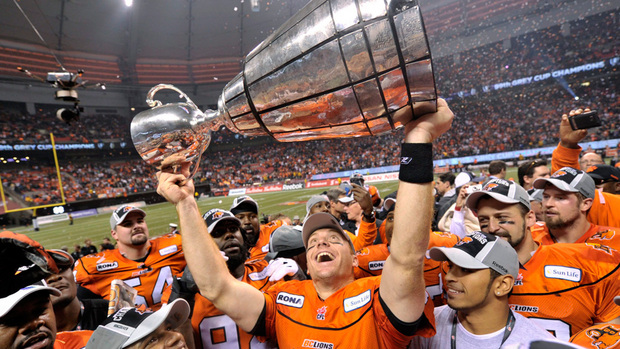 Canadian sport’s annual “there’s more to life than hockey” day saw true underdog stories come to the fore as the formerly hapless Winnipeg Blue Bombers took on the even-more-recently hapless B.C. Lions. Home advantage saw through, the Lions becoming the first side to come back from a 0-5 start to win the CFL Grey Cup – Canada’s second most popular sporting occasion of the calendar year.

Travis Lulay deservedly took home MVP honors with two second-half touchdowns in a 34-23 win over a side that went a disappointing 4-14 before this year’s title tilt. B.C. became the first side in almost 20 years to win the title on home soil. The 99th Grey Cup was only the fourth time this was done and the second time the Lions achieved such a feat.

The final score of 34-23 might suggest it was a bit of shootout when, in truth, the visitors never got close. B.C. opened up a 14-0 lead with an Andrew Harris touchdown run, a pair of field goals and a punt single before Winnipeg registered. 14-9 early in the third was as close as they got before Lulay turned on the afterburners with two touchdowns after another field goal; to make it 31-9. Scores in quick succession as Blue Bombers QB Buck Pierce threw to Greg Carr and Terence Edwards took the score to 31-23 with less than two minutes remaining. Kicker Paul McCallum’s fifth point scoring play of the match put the trophy into the hands of the Vancouver side and a sixth Grey Cup – taking them level with the Calgary Stampede.

While Lulay was winning the MVP, the Internet video landscape was captivated by two former CFL legends. The CFL alumni luncheon is not the place that you’d expect to find a brawl to grace the pages of YouTube and Vimeo. The situation stems from bad blood between former B.C. Lions QB Joe Kapp, 73, and ex-Hamilton Tiger-Cats D-lineman Angelo Mosca, 74 after a late-hit the latter delivered in the 1963 Grey Cup. Friday night was a whole new can of whoop-ass.

Kapp and Mosca got onto the stage expecting to chat about the hit before a fan vote. Kapp then thrust a flower into Mosca’s face as a peace offering. Mosca had obviously already made out with a bunch of flowers earlier in the evening and wondered whether Kapp might want a rendezvous with his crutch. Kapp’s right-left combo floored Mosca and comedian Ron James, who was hosting, was stunned.

“It was the most bizarre thing that’s happened to me in 31 years in the game. It’s unfortunate because lost in all this was the great work Leo Ezerins [CFL alumni association head] did to set this up to bring attention [to post-concussion syndrome in pro athletes],” James said.

GAMBLING AND SPORT IN NORTH AMERICA? SAY IT AIN’T SO!

Even after producing a high-scoring finale and something to rival Friday Night Fight’s, the CFL still comes up with more. On the face of it CFL doesn’t look that different to America’s version, the NFL. Look closer and you’ll notice that this is a sport that recognizes gambling taking place and doesn’t simply shy away with the view that gambling = bad. The league’s progressive attitude has lead to a number of deals with gambling industry firms with logos of one international sportsbook (Bodog) even seen on the field of play during last night’s game. Canada…take a bow.