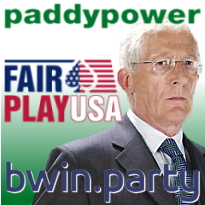 Paddy Power will have to wait until after Christmas to learn whether its bid for a Nevada gaming license will get the nod from Santa, er, state regulators. CEO Patrick Kennedy told the Irish Independent that the application, which had been expected to be weighed and measured by the Nevada Gaming Commission this month, will not be examined until early 2012. If approved, it would make the Paddsters the first European outfit authorized to offer licensed gaming services to Nevada residents.

In other Paddy news, the company claims it’s been taken for a “five figure” sum after a suspicious number of late bets came in on Nick Hewer’s chances to take over hosting duties on daytime TV program Countdown. Hewer (pictured at right), last seen holding Lord Alan Sugar’s spittoon on the Apprentice, was at 100-1 odds before a torrent of money came pouring in, shifting the line to dead evens within a week. The Mirror quoted a Paddy spokesperson as saying the late surge was no fluke. “The secret got out. People clearly knew.” Channel 4, which broadcasts Countdown, declined comment.

Online poker grassroots/Astroturf outfit FairPlayUSA has added yet another high-profile ex-law enforcement agent to its ranks. Jack Garcia, a 25-year FBI veteran whose credits include infiltrating New York’s Gambino crime family, joins former FBI Director Louis Freeh and former Homeland Security chief Tom Ridge among the crime-fighters on FairPlay’s active duty roster. Garcia currently serves as a guest speaker and lecturer at the FBI Academy, where we presume the number one post-lecture question asked is: “So, was J. Edgar Hoover really a cross-dresser?”