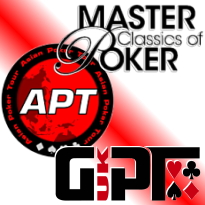 David Boyaciyan has won the 2011 Master Classics of Poker main event in Amsterdam. In addition to the Dutchman’s sense of pride for notching the victory on home soil, there’s the not insignificant matter of the €382k prize money he earned in the process. The €5k buy-in main event attracted a field of 294 players over four days, and the final table was a proper international affair, with (aside from Boyaciyan) a Finn, a Canuck, a Swede, a Greek and four Yanks. It was Finland’s Jussi Nevanlinna who survived to face Boyaciyan heads-up, but Boyaciyan hit a straight on the second to last hand that made the outcome a foregone conclusion. Nevanlinna earned €227.8k for his runner-up finish, while Sweden’s Victor Wessman took third and €130.8k.

Andy Peters outlasted a 262-strong field at the Grosvenor UK Poker Tour main event in Blackpool over the weekend, earning £72k for his efforts. The win is Peters’ first live scalp, which came after defeating Benjamin Jackson heads-up. Jackson was reportedly accosted by a knife-wielding douchebag on his way out the casino door, but Jackson survived unscathed and, since he didn’t have his £47k winnings on him, the would-be bandit was doubly unlucky. Karma rules!

From a starting field of 157, Sangeeth Mohan has won the Asian Poker Tour Goa main event to earn €33.8k. The Indian player is definitely on a roll, having picked up €7.5k for taking down the ‘Greed’ event at the same tourney earlier this week. Sameer Rattonsey finished second in the main event, while Jasven Saigal took third.

The European Poker Tour is making its first visit to Greece with a stop at the Club Hotel Casino Loutraki near Corinth. The €4k buy-in attracted 145 entrants on Day 1A, with German Julian Herold holding the chip lead at the end of play. The champ will receive his due on Sunday, Nov. 20.