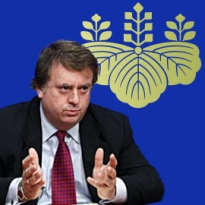 Las Vegas Sands (LVS) bigwig Sheldon Adelson was inducted into the American Gaming Association’s Gaming Hall of Fame (along with the Blue Man Group and local chef Charlie Palmer) on Tuesday night at the Venetian Resort Hotel Casino in Las Vegas. It’s been a pretty good week for Adelson, currently riding high on his company’s boffo Q3 results, to which operations in the white-hot Asian gambling hubs of Macau and Singapore contributed the lion’s share of LVS’ 26.2% revenue growth.

Caesars Entertainment CEO Gary Loveman has yet to receive his Gaming Hall of Fame induction notice, but we’re sure his infamous decision not to apply for a Macau gaming license way back when had nothing to do with the omission. Besides, Gary’s keen to make amends for his earlier shortsightedness by pressing hard to make inroads into untapped Asian markets, including Japan. Inside Asian Gaming reports (by way of Japanese consultants Gaming Capital Management) that on Friday, Oct. 28, Loveman made a 15-minute pitch to the members of the Integrated Resort Diet Members Association, a cross-party confab of politicians keen to bring destination casinos to Japan’s shores.

Among the 120-odd people at Friday’s meeting were 20 Diet members (out of a total 722 representatives in Japan’s legislature). Sakihito Ozama, a member of the governing Democratic Party of Japan (DPJ) suggested the ETA for passage of Japan’s draft legislation on casinos could be reduced from two years to one due to (a) the need for economic stimulus in the wake of the country’s recent ecological disasters, and (b) the desire to avoid getting scooped by South Korean politicians, who are contemplating climbing aboard the integrated resort money train themselves.

All party reps in attendance voiced the opinion that the casino bill needed to come up for debate during the Diet’s current extraordinary session, i.e. before January. If/when that bill meets with a favorable vote, Toshihiko Satake, policy secretary for the DPJ’s Issei Koga, predicted “casino operations will be ready in three years.” Assuming that all transpires according to plan, and Loveman manages to avoid being outmaneuvered (again) by the wily Adelson for a Japanese gaming license, Gary might yet find his name on the AGA’s Hall of Fame ballot. Perhaps even before Céline Dion gets inducted.