NFL boosts gambling sites in US; NetPlay deal with Channel 5; Bet365 on IT hunt 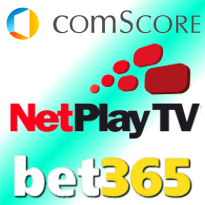 The National Football League is being credited with making online gambling the fastest growing category of US web activity in September. According to comScore’s internet barometer, online gambling sites received 9.7m visitors in September, not a huge sum in comparison to more mainstream sites like news or education, but a 13% jump over the previous month, larger than that experienced by any other category.

Broken down by individual sites, PokerStars finished in the top position with 1.1m visitors (up 11%), free NFL betting site UPickEm.net was second with 993k (up 36%) and Full Tilt Poker was third with 753k. We haven’t seen the full comScore report, but since both PokerStars and FTP claim to have withdrawn from the US market (and FTP is essentially a nonperforming shell by this point), we’re going to assume the PokerStars visits were to the .net site, while the FTP visits were from players with bankrolls in limbo checking to see whether the FTP site still had a pulse. Either that or Comscore has mistakenly republished last September’s numbers.

Interactive gaming outfit NetPlayTV has put the finishing touches on a new five-year deal with UK terrestrial broadcaster Channel 5. The deal expands on the existing two-year relationship between Channel 5 and NetPlay’s Supercasino.com brand and will further boost NetPlay’s exposure beyond its current presence of 23.5 hours/week. Both parties issued the standard ‘this is the happiest day of our lives’ pronouncements.

Ever-expanding Bet365 is on the hunt for new talent, specifically, a new team of software developers and network architects to build a more efficient IT platform. Company CTO Mark Davies told ComputerWorldUK that having an open mind will be key to moving your resumé to the top of the pile, because the traditional multi-threading approach to writing software doesn’t scale efficiently. “We currently have computers with 80 CPU cores and next year we will have 160 CPU cores. The issue isn’t going quicker because you have more CPUs. You have to change the way you write the software.” Once assembled, the new team will be kept separate from the existing IT boffins, who will focus on keeping Bet365’s ship afloat, while the new team goes all skunkworks.