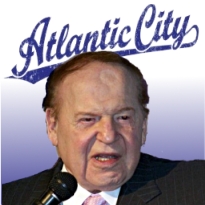 They were this close. After recording one of their worst revenue months on record in August, Atlantic City’s 11 casinos came within 0.6% of arresting their long, sad decline. While that represented the smallest monthly decline this year, September’s negative numbers officially extended this downward spiral to 37 consecutive months. Gambling revenue was $294.7m, with slots off 1.9% but table game winnings were up 2.7%. (Loaded dice? They are desperate, after all.) So far in 2011, total gaming revenue in AC is off 7.8% at $2.6b.

AC could face even more east coast competition if/when Florida politicians get around to approving those destination casino plans. State Senator Ellyn Bogdanoff, co-author of a bill that would bring as many as three casinos to Miami-Dade and Broward counties, says Florida “could become the Disney of gaming.” (Ironically, Walt Disney World reps oppose the casino idea.) Gov. Rick Scott has been publicly noncommittal on the issue, saying only that he doesn’t want “to make this state so dependent on gaming that we balance our budget just on gaming.” Scott also joked that (much like the long drawn out battle to bring intrastate online poker to California) Florida’s new casino bill should be called the “lobbyist full employment act.” Actually, Scott’s only half joking. Recent disclosure documents show that the fifth biggest campaign donor to Scott’s own party is Genting, the Malaysian company hoping to build a casino in Miami. Genting gave Florida’s Republicans $160k between July and October, while Isle of Capri Casinos and Mardi Gras Gaming each ponied up $40k.

But where is Las Vegas Sands (LVS), which is trying to get a Miami casino license and cock-block Genting? Well, perhaps chairman Sheldon Adelson was a bit short after being ordered to pay $1m in court costs when his defamation suit against UK labor union UNITE HERE was dismissed on Friday. Adelson filed suit in 2004 after taking exception to comments made by UNITE HERE officials to the then-ruling Labour Party at a meeting to discuss LVS plans to build a casino around the Glasgow Rangers’ football stadium. The precise nature of the comments remains somewhat opaque, but LVS reps cited a “campaign to smear” Adelson’s good name. Nonetheless, Adelson had taken no further action on the suit since March 2008, prompting UNITE HERE to claim abuse of process and request dismissal. On Friday, the judge agreed, noting Adelson’s apparent lack of interest in pursuing the matter. Naturally, LVS now says it wants to appeal, but that remains at the discretion of the presiding judge. Much will likely hinge on the legal dictum of ‘you snooze, you lose.’