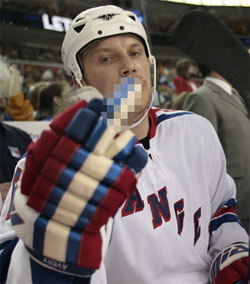 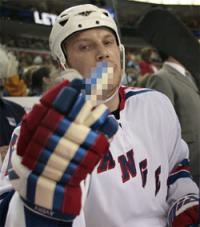 Are we really supposed to believe that the cheapest and dirtiest player in the NHL has somehow turned into a whistle-blower and police-man for cordial behaviour on the ice?

That’s exactly the rap Sean Avery is trying to pull these days. After sucker- punching Wayne Simmonds of the New York Rangers, the two players continued to mix it up all game, in what was an extremely physical pre- season game.

But it’s Avery’s comments after the game that are drawing the most attentions. Avery told reporters that during the game, Simmonds hurled homophobic slurs at him, something Avery found unacceptable.

Avery told reporters, “First of all, who would do that…And why would you do it? It’s just such an unnecessary thing. It’s something that’s not even an issue with us or our sport. So to be here now and having to answer your questions about what he did is disappointing for me.” -CSNPhilly

Avery continued: “I mean Kobe [Bryant] got fined 100 grand. Everything is different now. You know, it’s an issue. It is an issue that people are dealing with and trying to overcome. And I guess 10 years ago, maybe it was not such an issue. But it is such an issue politically with people in the game and just in life in general.” – CSNPhilly

I’m quite certain that Avery has been called much worse and given his instigating history as a player, I’d bet the house homophobic slurs have been used on him in the past, this is the first time he’s ever reported it and it’s clear to me that his motives are inflammatory.

What NHL player complains to the media about trash talk said on the ice? Sure, homophobic slurs have no place in the game and if officials or the camera catch players using them, they should be punished.

But for another player to snitch?

Players and coaches will have to act politically correct on this one, but there’s an unwritten code in the NHL, which Avery has broken before and certainly just broke again.