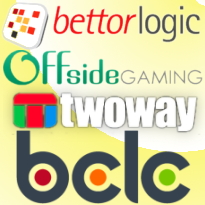 Vancouver Canucks goaltender Roberto Luongo has signed on to promote the poker room of the British Columbia Lottery Corporation’s online gambling site, PlayNow.com. A noted poker fan, Luongo will appear in PlayNow’s marketing, as well as host his own land-based charity poker tournament. Poker-playing Canucks fans will no doubt relish the notion of testing their online mettle against the Olympic gold-medal netminder, but if they beat Luongo as badly as the Bruins did in Game 7, will it be Luongo’s turn to go downtown and set some cars on fire?

Form analysts Bettorlogic are right chuffed to announce the launch of Nextbet, a tool that provides punters with suggestions on what to bet on, er, next. The system is designed to work both pre-event and in-play. A variation on the “you might also like…” feature of other retail sites, Nextbet utilizes customer preference logic, combining performance data, customer data and details of a punter’s last bet to gently nudge said punter to his next wager.

Australlian interactive media and gambling outfit Two Way Limited has scored a Malaysian sugar daddy in entrepreneur Gerald Tan. Tan has agreed to pump as much as $2m of expansion capital into Two Way’s hands, which the company hopes will allow it to make inroads into the Asian market. In the short term, the money will pay for a marketing campaign for Two Way’s Tab Active television wagering product. In exchange for opening his wallet, Tan will receive a director position with Two Way and 60m shares valued at two cents apiece.