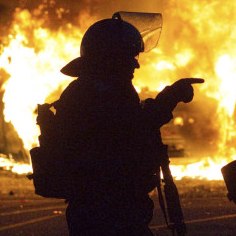 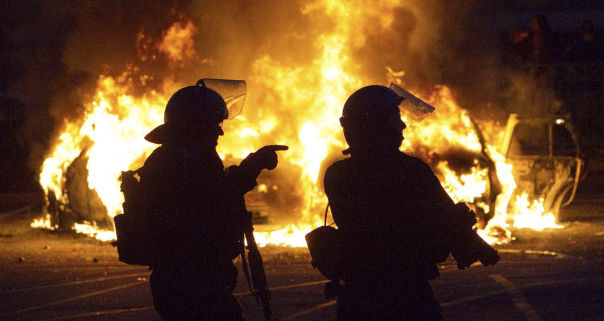 See, Canada? This is why you can’t have nice things.

The city of Vancouver erupted in violence Wednesday night after the Boston Bruins defeated the hometown Canucks to win the Stanley Cup. In a game that was never really in doubt, the on-ice lethargy displayed by Vancouver’s hockey heroes appears to have had an inverse effect on the estimated 100,000 people who packed the downtown core to watch the game on a supersized TV screen set up on the street. Before the Bruins had even hoisted the Cup, a car was overturned, then set ablaze. Lo and behold, more vehicles spontaneously combusted. Shop windows were broken and the crowd quickly proceeded to the looting portion of the Hockey Riot pentathlon.

Call it Riot Redux. Based on the footage we’ve seen, most of Wednesday’s hockey hooligans were young enough to be regularly shitting themselves in public back in 1994, the last time the Canucks lost a Stanley Cup Game 7. The 1994 riot came as something of a surprise to laid-back, pot-smoking, yoga-pants-wearing, granola-eating Vancouverites, but most people expected some shenanigans this time around, win or lose. The 1994 riot has since acquired legendary WTF status, meaning most of 2011’s looters had undoubtedly viewed the countless hours of 1994 riot footage available on YouTube.

In that sense, this riot was like the 25th anniversary of Woodstock (which coincidentally also took place in 1994), where the attendees took great delight in covering themselves in mud – not because covering oneself in filth was all that much fun, but because it made them look more like the hippies they’d seen in the Woodstock movie. So, let’s break stuff in downtown Vancouver after losing the Cup, because… we’re supposed to. Plus I could really use a new flat screen TV.

Vancouver city council famously banned mixed martial arts events a number of years back, in part over how much it would cost to hire sufficient numbers of cops to deal with the testosterone-crazed crowd that was expected to spill out into the streets afterwards, hell bent on slapping rear naked chokes on senior citizens and such. Given that precedent, it seems obvious to us that Vancouver needs to ban hockey. It’s the perfect time, what with the 2010-11 season now officially in the books. Hell, if we get an extended Indian summer, maybe people won’t even notice hockey’s absence come October. 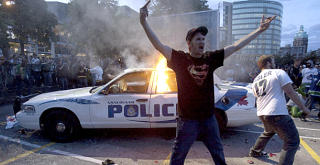 Meanwhile, Vancouver’s mayor Gregor Robertson has been telling any journalist who’ll listen that the carnage is down to the actions of an irresponsible minority; that the vast majority of Vancouverites who assembled downtown were just there to enjoy the game. He’s right, of course. It’s the same kind of rational argument the online gaming industry uses whenever some ‘think of the children’ type suggests shutting us down because an irresponsible minority gamble more than they can afford to lose. But don’t get us started…

Anyway, on the positive side, the Neanderthal cranial capacity of most of the looters will ultimately be their undoing. In this technological age, every individual act of anarchy has been filmed (in high-definition) by literally thousands of different camera angles; footage of which has already begun appearing on Facebook, YouTube and other social media outlets. No doubt the police will be scouring the lot of it in due course. So, get ready, dickheads: your 15 minutes of fame — and your six months of court-ordered community service — are just about to begin.