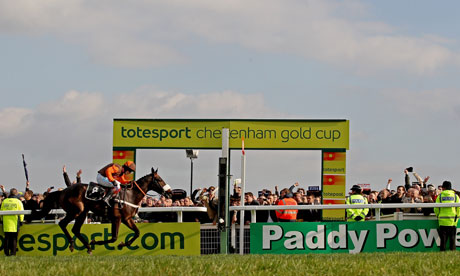 One of British horseracing’s premier steeplechase events has received reassurances from Betfred that sponsorship is likely to continue following the current deal’s expiration next year. Ownership of the Tote has meant that they have taken over sponsorship of next year’s Gold Cup. After that, the agreement runs out and it remains to be seen where the [insert sponsor name here] Cheltenham Gold Cup goes next. We spoke to Betfred spokesman Mark Pearson who was optimistic about both this and a number of other sponsorship deals for the sport.

“We are in early negotiations with lots of racecourses about future sponsorships and all meetings so far have been very positive. We will be sitting down with Cheltenham very soon to discuss this year’s Gold Cup and future years. What is for certain is that we are committed to British Racing and we will remain the sport’s biggest sponsor.”

This is of course as long as the organizers don’t decide to sell the race as part of a series of races, something that is becoming increasingly popular in the horseracing industry. Track spokesperson Andy Clifton told the Guardian, “One thing that we’re interesting in pursuing is the “road to Cheltenham” concept, as with the Champion Hurdle. Where possible, we’d like to offer continuity throughout the season, so that it’s not just a one-off proposition.

That would open up even more of a commercial opportunity for someone like Betfred to sponsor a large series of races. Stan James backs the aforementioned Champion Hurdle.