Home / Business / SkyBet is more enamored to iPhone than Android 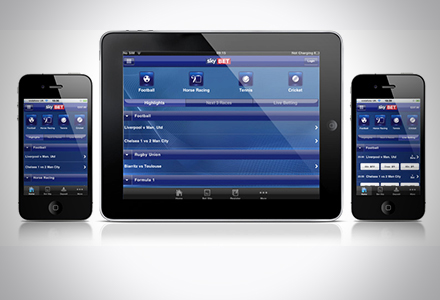 The situation on battlefield mobile OS currently involves two legions: those backing Google’s Android system and the might of Apple’s iOS. Both have seen off any competitors and made sure that brands such as Research in Motion’s BlackBerry don’t have a cat in hell’s chance to make any kind of headway. The online gambling industry now calls smart phones one of its many homes meaning that different platforms need to be taken into consideration.

As a result of the increased growth many companies have created all manner of native apps and sites. The choice between those two has also been feverish and conferences have seen companies explaining the differences that lie between the two. Much of the complaining about Apple is the length of time taken for apps to gain approval. The problems with Android meanwhile being that there are too many apps in the Market.

We spoke to Ben Kamara, Sportsbook Product Manager – Mobile at SkyBet, earlier today to try and gain more of an idea about which of the two OS’s is currently leading the way. In terms of SkyBet, they are firmly in the Apple camp for the moment and Kamara told us that the preference among customers was firmly with the iPhone.

He said, “The iPhone App has been developed first because more of our customers use it but Android App is due in the very near future, both mobile web site were developed simultaneously. We have no preference for one over the other. Some features are available on iPhone and not available on Android, although this is down to the suppliers and no ourselves.”

Android is currently leading by a long way in terms of the share it possesses of the market. In not having a native app for the system firms will undoubtedly miss out and Android is likely to receive a lot more spotlight over the coming months.

One of the best things about Android is that there’s a much wider choice of devices, something that Kamara recognizes.

Kamara also added, “iPhone is currently market leader in terms of our customer base but we have (and I would expect it to continue) seen Android steadily increase. It will be interesting to see how WindowsPhone Mango and Blackberry Touchscreen phones do in the next 6-12 months.”

SkyBet’s app is currently one of those that see a lot of usage and thanks to the deal that Sky has with the Premier League the company will continue receive significant exposure amongst soccer fans. More of a focus on Android might stand them in even better stead though.