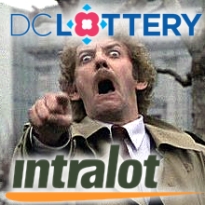 The District of Columbia’s oft-delayed plans to launch a first-in-the-nation intrastate online gambling service may face further delays. Three DC Council members are calling for an investigation into alleged “anomalies” in the awarding of the DC Lottery contract to Greek provider Intralot in 2009. Council members Jack Evans, Tommy Wells and Muriel Bowser want DC’s Inspector General Charles Willoughby to examine how Intralot’s local partner – Veteran Services Corp. – was given a 51% stake in the District’s lottery contract, despite not having taken part in the competitive bidding stage.

The Council members claim to be acting because Attorney General Willoughby has not acted on concerns raised by former Chief Procurement Officer David Gragan and former Attorney General Peter Nickles. Gragan and Nickles wanted to know what CFO Natwar Gandhi was smoking when he approved the contract. Nickles went as far as to suggest that if Willoughby “has not interviewed the people whose names I provided, then he ought to be fired.”

Council member Evans was largely responsible for requiring DC Lottery to hold a series of public meetings on the impact of the online gambling law, while Wells has promised to introduce legislation repealing the plan. Each man claims to have not taken a firm stand one way or the other on the merits of online poker, but neither seems particularly upset at the notion that examining the lottery contract would put more scrutiny on poker in DC.

Referring to Council member Michael Brown’s UIGEA-style last-minute addition of the poker bill into DC’s supplemental budget last Christmas, Evans said Brown’s legislation “should have been introduced as a free-standing bill; then we would have had the necessary hearings. Since that’s not what happened, we’re trying to play catch-up by holding hearings after the fact.” Wells echoed the concern that online poker “could have substantial impact, so there needs to be a normal legislative process … we need a full committee report on this.”

Undaunted, Intralot has been advertising for personnel to help power igamingdc.com. Intralot VP Byron Boothe told the Washington Times that, while he realizes the District’s poker plan still faces some significant procedural hurdles, “the city has to make its decision at some point.” Nevertheless, the hiring of an estimated 11 personnel “is going to be a slow process. We don’t want to hire someone and then not have a job for them.” Perhaps Intralot’s caution is warranted, considering the company just announced a 95% drop in Q2 profit. Bloomberg reported that Interlot SA revenues and earnings were off 8.8% and 8.6% respectively, while profit went from €10.2m in Q2 2010 to just €500k this year.

Intriguingly, Intralot’s new hires will reportedly be focused not just on DC, but also on three unnamed states. Intralot’s website cites lottery deals with nine US states: Montana, Idaho, New Mexico, South Carolina, Ohio, Louisiana, New Hampshire, Vermont and Arkansas. However, Boothe isn’t promising anyone a job unless politicians can ensure there will be a job to do, and those jobs in DC are looking less and less certain with every passing day.