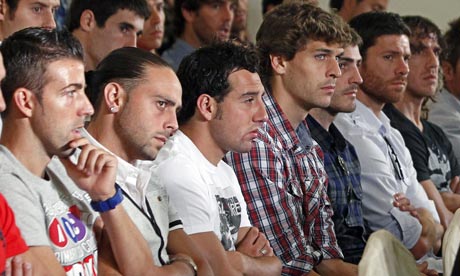 For much of the summer, the US sporting landscape has been dominated by what hasn’t been happening. When would the lockout be done? Was there even a lockout in the first place or were they just playing with us? When is Brett Favre coming back? Little brother Europe has now jumped on the great strike bandwagon, as one of the continent’s biggest leagues won’t be seeing any action this weekend.

The strike, which the Spanish league (LFP) was unable to avert, means that the top two leagues will both be suspended for this weekend’s opening round of games. It’s the first time in 27 years that it has happened in Spain and is all down to a break down in discussion between LFP and the players’s union (AFE).

Why are they striking though? The union is demanding that a central fund is set up that will protect players who are not paid by their clubs due to the money not being there. AFE president José Luis Rubiales demanded that there be a big enough fund set up so to protect all unpaid wager to all players. LFP offered €10m (£8.6m) per season something that wouldn’t even cover the debts run up over the last season.

Rubiales added that 200 players have experienced late payment of salaries or have simply never seen the wonga whatsoever. The figure for unpaid wages rose from €12m in 2009/10 to €50m last season and that in itself is reason enough for the concerns. It’s also a fact that 22 of the 42 clubs in the top two division have been placed into administration over the past few years. A number that is shocking to say the least. So many clubs do this thanks to there being no sporting penalty for economic mismanagement therefore it’s just an easy way out for clubs to enter administration.

Spain’s La Liga possesses the best club side in the world and the two best players on the entire planet. Players from Real Madrid and Barcelona, including Iker Casillas, Carles Puyol, David Villa and Xabi Alonso are backing the ban that could drag on for some time.