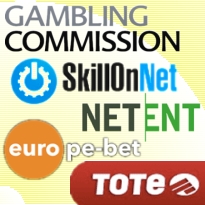 If current trends continue, betting shops could soon eclipse banks on UK high streets, according to stats compiled by both gambling and banking industries. The UK Gambling Commission says there are currently 8,927 betting shops in operation, and 11 more are being added every month. William Hill and Ladbrokes alone added 67 shops over the last 10 months of 2010. (Well, of course they did. People keep burning the old ones down.) Banks, on the other hand, operate about 9,600 total branches in the UK, but are closing them at a rate of 14 per month. (Seriously, what did you people do with all that bailout dosh, anyway?) The top four bet shop chains (by number) are Will Hill (2,305); Lads (2,098); Gala Coral (1,650) and Betfred (859).

Georgian operator Europe-bet has tapped SkillOnNet to provide them with a “Georgian-flavored” online backgammon room. SkillOnNet operates the world’s largest backgammon network, which is why marketing director Michael Golembo says things like “Operators should ignore backgammon at their peril.” An unnamed Europe-bet spokesperson stated that the B2B deal would surely “make us number one backgammon program’s provider in Georgia.” Plus, he added, sleeping at night was so much easier now that his company was peril-free.

Net Entertainment’s Mega Fortune jackpot is currently sitting at €7.86m, blowing the doors off the previous online progressive jackpot record of €6.3m. The five-reel, 25-bet-line video slot sports (oddly enough) a luxury theme – all champagne, jewelry, flash cars and such. If Stephen Colbert’s ‘Colbert Platinum’ segment had an online casino sponsor, this would be the one.

Tote Ireland has appointed Craig Robertson as general manager, effective Aug. 8. The Scots native has worked in Ireland since 2003 in a variety of commercial positions, including Head of Development at CBS Corporation and Head of Support Services at St. James’ Hospital. So, at the very least, if a jockey takes a tumble, Craig can probably help him fill out the hospital admission forms.