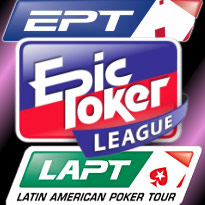 Switzerland’s Ronnie Kaiser has taken the European Poker Tour Tallinn main event title, his first major tournament trophy. In defeating 281 competitors (including his demolition of the final table in under five hours), Kaiser earned not only the €275k first prize payout, but also the adoration of his countrymen for becoming the first Swiss player to take down an EPT event. (Given the uncertainty surrounding the Euro these days, we bet Kaiser converted his winnings into Swiss francs within the hour.) Grzegorz Cichocki was your runner-up, earning €180k, while Raigo Aasmaa finished third for €110k. Next stop for the EPT is in Barcelona starting Aug. 27.

On the other side of the world, local boy Alex Komaromi has won the Latin American Poker Tour Punta del Este in Uruguay, outlasting 421 oppponents to earn just shy of $245k. Like Kaiser, Komaromi is also his nation’s first title holder. Argentina’s Claudio Piedrabuena finished second, earning $141k, and Venezuela’s Engelberth Moreno took third and $89k. Of the four Brazilian players who made the final table, none finished higher than fifth (Felipa Pasini).

The Epic Poker League’s inaugural event is in the books. Some 190 players took part in the $1,500 buy-in Pro/Am event, which was essentially a qualifier for the EPL’s first ever Main Event that got underway on Tuesday. Las Vegas pro Steve O’Dwyer, who failed to make the cut for the EPL’s first season roster, took top honors at the Pro/Am, earning $23,810. O’Dwyer also earned free entry into the $20k buy-in Main Event, along with the rest of the Pro/Am’s final nine finishers. Brandon Meyers finished second, while Andy Bloch (who’s already on the EPL roster) placed third.