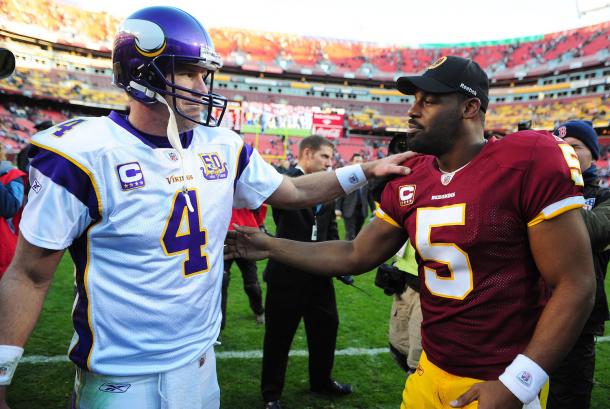 The NFL is back in full swing and with the NFL Lockout now a thing of the past, we now enter into what has become the craziest free agency frenzy in NFL history.

The number of big names that are on the trading and free agency blocks is unprecedented. Carson Palmer has already been retired by the Bengals after asking for a trade and now Donovan McNabb another big name NFL QB, has been dealt.

ESPN has reported that the Washington Redskins have a preliminary agreement in place to send quarterback Donovan McNabb to the Minnesota Vikings for a pair of sixth round draft picks, but further negotiation regarding McNabb’s current contract must be resolved before the deal is finalized.

The compelling part of this particular trade is that Donovan McNabb is returning to Minnesota and to an offense that he has familiarity with. But the bigger picture is just how McNabb will respond this season after having been disrespected and shamed last season in Washington. There’s no real way to sugar coat how McNabb was dissed in Washington. In fact, one has to ask why the Redskins made the move to get McNabb in the first place, as it quickly became clear he was the not the guy they were looking for.

Many NFL fans will remember the game in which McNabb was pulled in the last two minutes in favor of Rex Grossman, the writing was on the wall then.

In Minnesota, McNabb will have all the weapons necessary to have a good year and lead the Vikings back into playoff contention. McNabb is a proven winner in the NFL but with his age, the biggest question that is yet to be answered is just how much juice does McNabb have left in the tank? This season is all about redemption for Donovan McNabb.

Does the addition of McNabb make Minnesota a Super Bowl contender? Most books already have odds up futures for who will win the 2012 Super Bowl. The Vikings are generally listed at 20-1, which is an attractive bet considering they now have another veteran QB back at the helm.