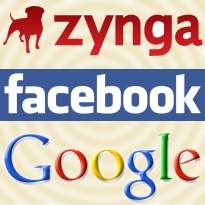 On Monday, social games developer Zynga filed a new 619-page document with the Securities and Exchange Commission in preparation for its imminent initial public offering. Zynga’s previous SEC filing revealed that the company had raised $845m via several rounds of fundraising, but neglected to identify any of the investors. The new document reveals that one of Zynga’s deep-pocketed investors is none other than Google. The exact amount of Google’s stake in Zynga isn’t spelled out, but various sources have suggested it’s between $100-200m (and most of these estimates peg the figure at the upper end of that range).

Of course, the relationship between Zynga and Facebook is well established. Under the terms of the five-year exclusive Facebook Credits deal Zynga signed last year, Facebook gets a 30% slice of all virtual goods sold via Zynga games. If Zynga plans to launch a new game, it has to let Facebook know a week in advance. In exchange for Facebook helping Zynga meet certain growth targets, Zynga requires players to access its most popular games via a Facebook login.

Many other specifics – including the list of rival social platforms on which Zynga is barred from launching its games – were heavily redacted from the public version of the latest SEC filing. But in Zynga’s own words, the company derives “substantially all of our revenue” via Facebook. Taken as a whole, the filing essentially defines Zynga as a Facebook subsidiary, or, in less delicate terms, as Facebook’s bitch.

So what does Google hope to gain from its Zynga investment? If, as many suspect, Google is prepping its own games network to run on Google+, will Zynga be required to develop two parallel but distinctly separate libraries of games? If so, might Facebook have a ‘first-look’ clause hidden in the redacted portion of its Zynga deal that Google doesn’t know about?

On another front in the Google v. Facebook wars, Mark Zuckerberg’s lawyers recently blocked a third-party developer tool that allowed Google’s Chrome browser to export a Facebook user’s friend list (along with email addresses) to (ahem) rival social networks. This move has raised ethical and legal questions as to who owns this info – the user or Facebook. As far as Facebook is concerned, “a person has no more right to mass export all of her friends’ private email addresses than she does to mass export all of her friends’ private photo albums.”

There’s more than a tinge of irony in that statement, as Facebook unsuccessfully attempted to do the exact same thing last year with Gmail users’ contact lists. And as tech blogger Michael Arrington notes, “Facebook already allows mass exporting of friends’ private email addresses via deals with Microsoft, Yahoo and possibly other partners.” Facebook’s apparent belief that such behavior is only okay when Facebook gets paid could ultimately be considered anti-competitive by US regulators. That would definitely be considered a Facebook minus, and another Google plus.