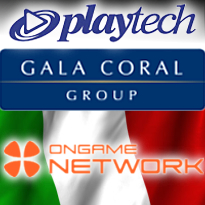 Following rumors first floated in May, the Financial Times is reporting that Playtech has inked a 10-year deal to supply Gala Coral with all its online gaming needs. The deal, expected to be announced on Wednesday, calls for Playtech to provide Gala Coral with sports betting, casino and bingo software, marking the first such all-encompassing product deal in Playtech’s history. The FT’s source claims the deal could generate as much as €5m annually in pre-tax profit for Playtech, starting as early as 2012. Playtech already supplies gaming terminals to Gala Coral’s betting shops.

Italian online poker players, previously restricted to tournament play, can now take part in cash games via the Ongame Network. Network partners bwin and Gioco Digitale’s GDPoker are first out of the cash game gate, but Ongame CEO Peter Bertilsson told eGamingReview that other network sites will follow their lead by August. The Italian government’s prohibition against cash games came to an end Monday night, and other sites that have already been granted .it licenses, including PokerStars and the iPoker Network, are expected to join the cash club in due course. Another .it license holder, Party Poker, will continue to offer services via the Ongame platform until a buyer for the bwin.party ‘surplus asset’ can be found.