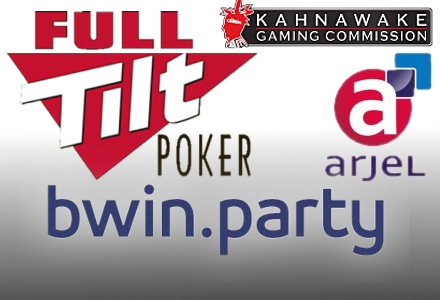 Since July, 2010, Kolyma Corporation A.V.V. (“Kolyma”), carrying on business as Full Tilt Poker, has held a Secondary Client Provider Authorization, issued by the Kahnawake Gaming Commission (the “KGC”). The KGC issues a Secondary CPA only in cases where an operator holds a valid license issued by a primary jurisdiction and has its head office and focus of operations in that primary jurisdiction. The KGC is aware that the Alderney Gambling Control Commission (“AGCC”), has recently issued Suspension Notices against several companies collectively operating as Full Tilt Poker. In view of these recent actions, the KGC is reviewing all available information to determine whether the Secondary CPA presently held by Kolyma will be continued. A further announcement will be made shortly.

While rumors continue to fly that FTP has been attempting to relaunch operations under a KGC banner since Wednesday (the ‘system maintenance’ banner on FTP has now been changed to ‘system update‘), it’s worth noting that the AGCC’s public statement on its suspension of FTP’s license specifically prohibited FTP from registering new customers, allowing existing customers to deposit or withdraw funds, or allowing any kind of gambling transaction before its AGCC hearing in London on July 26.

✖ French gaming regulator ARJEL released a statement in which it suggested it’s not quite ready to revoke FTP’s French operating privileges, but advised FTP to get its ass in motion to restore French players’ accessibility to the .fr site “without delay.” ARJEL president Jean-Francois Vilotte said his organization has ordered FTP “to find technical solutions to continue to serve the French players who need to access the site.” Failure to do so in a timely manner means FTP “will draw the consequences.”

✖ QuadJacks.com host @AgentMarco claims a source inside FTP told him “Jack Binion is now the company’s investor.” Binion was rumored to have been discussing investing in the floundering poker company earlier this week. Marco claims his source has been right before, but that’s the sum total of the details he’s been given so far. FTP’s own site had claimed that the company was engaged in discussions with multiple parties about taking a chunk of FTP, and a CalvinAyre.com source has since told us that bwin.party (Pwin) had a US $185m offer on the table to buy FTP outright. Pwin co-heads Norbert Teufelberger and Jim Ryan were reportedly in Dublin negotiating with FTP honcho Ray Bitar, but yanked their offer off the table and their asses out of Ireland after Alderney pulled FTP’s plug.

✖ German magazine PokerOlymp printed an interview with an anonymous/disgruntled employee of FTP’s Irish-based support operation Pocket Kings, who claims FTP’s CFO was incapable of even surveying the full picture of the company’s financial woes post-Black Friday, let alone solving them. The employee also said that all ‘non-vital’ budgets had been effectively reduced to zero. Other complaints include that Ray Bitar had issued but a single statement to employees since Black Friday, and even that was merely to thank them for their efforts during such trying times. This slapdash communications strategy was allegedly systemic at FTP (US players don’t need to be told this), as the employee claimed that obtaining approval or disapproval on any project from higher-ups could take months. PokerOlymp stressed that there was no way of corroborating the employee’s allegations, but that they considered him to be trustworthy.