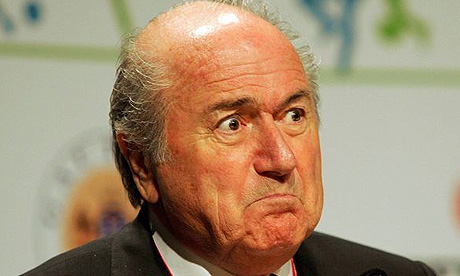 A campaign that started out being criticized by its own country is on the verge of causing the breakdown of the governing body of the world’s biggest sport. Ever since Sepp Blatter became president of FIFA back in 1998, the allegations of corruption have only intensified and it has all come to a head with the suspension of two senior members of the Executive Committee. Anyone who’s familiar with the entire goings on should hardly be surprised though.

It has come to the fore on the eve of Blatter’s latest cake-walk to become FIFA president and the suspension of challenger Mohamed Bin Hammam means he runs unopposed. This is hardly the end of the repercussions though. You somehow had an inkling that England not winning the rights to host the World Cup back in December might come back to haunt FIFA. Four high profile sponsors have now even shunned them and with 10 of the 24 ExCo members implicated in corruption, it’s a big deal.

In the UK especially there’s hardly any surprise though.

One of the main accusations being leveled is that Qatar paid for the World Cup to be held in their country in 2022. This is heavily refuted by the oil rich nation but an email produced by vice president Jack Warner seems to say otherwise. He has also been suspended and says he has more dirt to dish.

In terms of the sports book industry, Victor Chandler spokesperson Charlie McCann told us, “I can’t see any way that Qatar can have the tournament taken away from them but if they did it couldn’t be Europe so it could only be the United States for me although it would set a dangerous precedent going forward. If they decided to reverse the original decision, it would surely lead to the break up of FIFA and the idea of Football’s governing body going the same way as boxing with a number of World Champions makes no appeal. That is an unedifying but possible scenario if FIFA reverse the 2022 decision.”

That may be the case as the organization spirals through this crisis. Whether this whole debacle could see England being awarded the 2022 World Cup remains to be seen. If they’d done that in the first place then FIFA might not be in such a mess and the widespread corruption wouldn’t have been proven. That company that made $1.3bn last year just got too greedy. Now they’re paying the consequences.