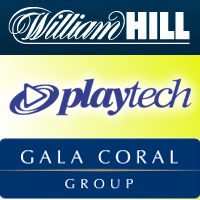 Playtech and William Hill have agreed to play nice, ending a dispute that began in February when William Hill filed an injunction to prevent Playtech from hooking up with Ladbrokes. Will Hill felt such a move could compromise its William Hill Online joint venture with Playtech. The new understanding will grant William Hill Online an expanded role in providing services to William Hill’s retail betting shops, while Playtech gets a little more latitude in licensing its software to other betting operators.

One might have assumed Playtech would immediately rush into Ladbrokes’ outstretched arms, but it’s Gala Coral that appears first to enjoy Playtech’s embrace. The Daily Mail claims the two companies are talking about hooking up, but on a software supply deal, not a joint venture like William Hill Online. While Gala’s online bingo makes money, its sports betting side “really punches below its weight,” in the words of the Mail’s source. Gala staff have been warned that if the Playtech talks are successful, layoffs in the IT department will be a given.

Gala also announced an internal reorganization that will split the company into various divisions, a move that would create over 100 new jobs. How the company intends to pay for these new hires isn’t clear. Earlier this month, Gala announced it was seeking £900m in loans to enable it to repay maturing debt, which isn’t even half of the over £2b of debt Gala is currently carrying on its books. Gala’s decision to get out its begging bowl led ratings agency Moody’s to cut the company’s debt rating to ‘highly speculative,’ while Fitch lowered Gala’s outlook from ‘stable’ to ‘negative.’