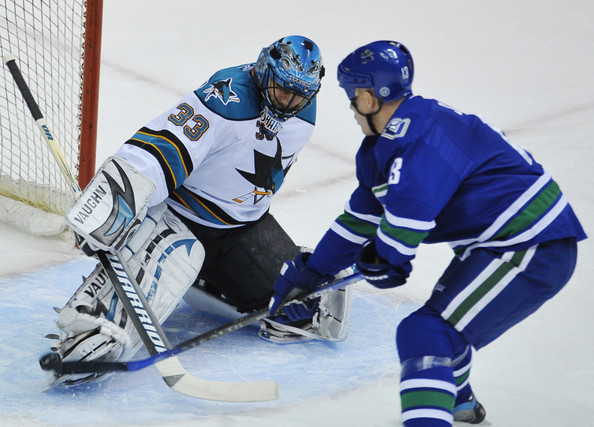 The San Jose Sharks managed to avoid what would have been a monumental collapse against the Detroit Red Wings by winning game 7 last night. Now the Sharks will play Canada’s team, the Vancouver Canucks for the right to go to the Stanley Cup Final.

The Sharks and the Canucks had a lot in common. Both teams have survived huge scares. The Canucks dodged a bullet in the first round against the Blackhawks by winning the series in 7 games after being up 3-0.

The Sharks know what that must have felt like. Last night, the Red Wings had battled back from being down 3-0 in the series, and were looking to become just the fourth team in history to win a series after dropping the first three games. San Jose barely escaped with the 3-2 victory, surviving a late charge by the never- say- die Red Wings.

But a win is a win in the NHL playoffs. Lord Stanley’s cup is arguably the hardest trophy in professional sports to win and both the San Jose Sharks and the Vancouver Canucks have learned that first hand. But these two teams also share a stigma as habitual underachievers. For the Canucks, this is the first time they’ve reached the Western Conference Finals since their last Stanley Cup run in 94’ and the Sharks have been favourites to go to the Stanley Cup Final for the past three years but always found ways to come up short.

If there is an advantage for the Sharks heading into game 1 on Sunday, it’s that they’re freshly battle tested. The Canucks disposed of the Nashville Predators in six tough games but have been resting for the past few days. The Sharks should have the edge in game one, riding the momentum of an emotional game 7 win against the Red Wings. After that, it should be the Canucks series to lose.

You have to give the goaltender edge to Luongo and the Canucks. And the Canucks top line seems to be clicking a little better than San Jose’s. Patrick Marleau of the San Jose Sharks has had a horrendous playoffs with only one goal since game 6 against the Kings. Fortunately for Marleau and the Sharks, that goal happened to be the game 7 winner.

The Canucks have their own problems on offense. The Sedin twins have been demoted to the team’s second line and not only are they not scoring goals, their line has become a defensive liability.

Vancouver does have the best player on the ice in Ryan Kesler, though Joe Thornton may have something to say about that. The Kesler vs Thornton match-up should be a physical battle as these two top center-men have battled before in the Winter Olympics.

Now Kessler is captain Canada, coming off as one of the better single player performances in a playoff series that you will ever see. So far in these playoffs, Kesler has had five goals and 10 assists, 15 points, and is a plus-6 in 13 games. If the Canucks can find a way to get past the Sharks, Ryan Kesler is almost a shoe-in for the Conn Smythe.

This series will likely go back and forth. But with an entire nation backing them, I can’t bet against the Canucks to take it in 7 games.

That said, the core of the San Jose Sharks are a bunch of Canadian thoroughbred hockey players, so they’ll be just as fired up by the crowds and the moment. Aside from Thornton and Marleau, look for players like Couture, Heatley, Setoguchi, Pavelski, Clowe and Boyle to make huge impacts on this series for the Sharks.